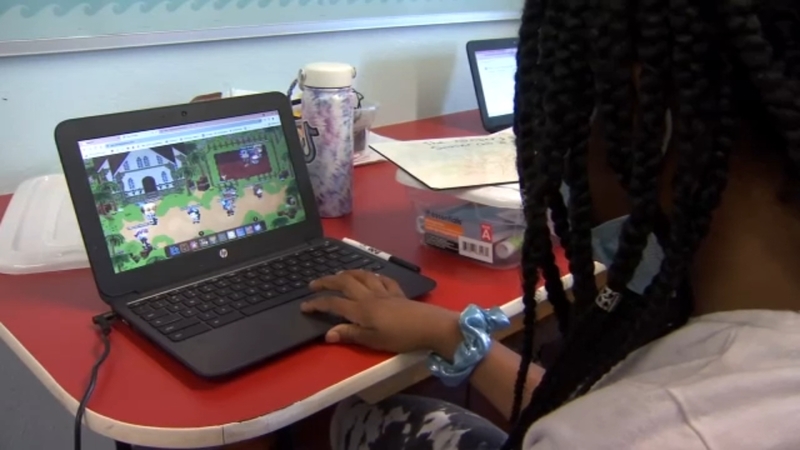 He and others from the community are claiming there is a lack of infrastructure that prevents the community from having adequate access to reliable internet.

"That's not the kids' problem, that's a bigger issue and we are trying to fix it," Pastor Criner says. "We started seeing kids sitting in front of Taco Bell or sitting in front of a Burger King to access the internet so they can have their laptops up to be able to go to school. That's too dangerous. That's ridiculous."

Misty Franklin lives in southwest Fresno. She was also on that Zoom call.

Franklin tells Action News internet issues impact her family and many others. "We need those resources, we need that internet in order for our children to be successful in addition to the working parents that reside in Southwest Fresno," Franklin says.

Franklin has two children who are students in the Fresno Unified School District. She says remote learning has been a major challenge, but she's stuck with the current service because other providers are too expensive.

"As we are logging on, I'm constantly calling the school letting them know that we can't get in or we are logging on but we are having internet issues," Franklin says. "When my daughter gets her report card, she's been marked tardy 16 times - to me that's absurd."

Action News reached out to Comcast about some of the connection problems. In response, a Comcast spokesperson said there's "no specific data to support the claims", but they've engaged construction and engineering crews to do a thorough analysis.

Angela Hiyama is the Director of Government Affairs South Valley for Comcast. On the Zoom call she said, "I do want to share that our infrastructure model does not discriminate against neighborhoods."

In a release in December, Comcast announced they will invest $1 billion over the next 10 years to help further close the digital divide. In addition, Comcast announced its initial plans to equip ten Fresno Housing and Boys & Girls Clubs of Fresno County locations throughout the Central Valley with WiFi-connected "Lift Zones" over the coming months.

In the meantime, a community member gifted the church a WiFi extender antenna to help with the internet problems.

The church has also established a community learning center on its property that serves 30 to 40 students who aren't able to access internet at home.

Plus, the local internet provider, CVIN, has stepped up to offer the church and the surrounding area an alternative option for free-high speed internet.

Jeremy Miller is the co-director of Saint Rest's Learning Center. He says, "It brings a sense of hope, and we refuse to allow our children to fail."

On that Zoom meeting, Hiyama concluded they have scheduled a walkout where their construction teams go back to assess the fiber line for next steps.