The CHP says 23-month old Jasper Wu was likely killed by a stray bullet while sitting in the backseat of his mother's car.
KGO
By Cornell Barnard 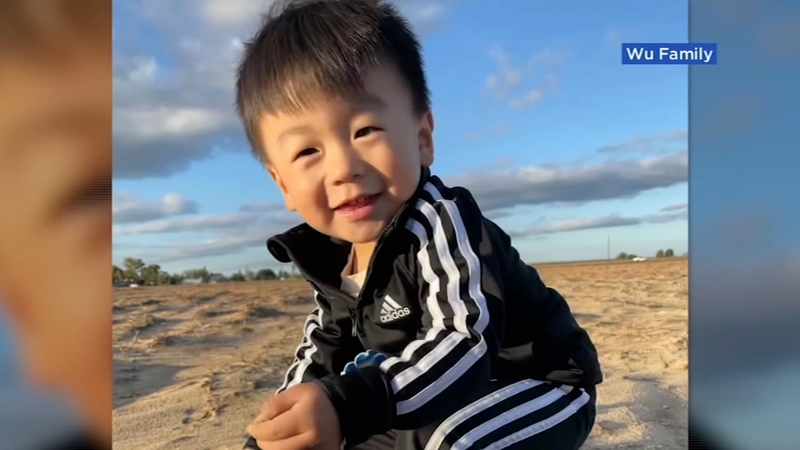 FREMONT, Calif. -- The family of a toddler in Fremont, northern California, is heartbroken, a day after 23-month old Jasper Wu lost his life.

The CHP says he was likely killed by a stray bullet on Interstate 880 in Oakland, while sitting in the backseat of his mother's car.

There is shock and sadness about an innocent life lost across the Bay Area, while police search for suspects.

"It's just so devastating, so sad," said Lucy Tovar.

Relatives say the 23-month-old was asleep in his car seat riding in his mother's white Lexus when the car was struck by gunfire Saturday afternoon.

Little Jasper was rushed to Oakland Children's Hospital, suffering from a head wound where he died from his injuries.

Dashcam video taken after the shooting shows police on the freeway investigating the chaotic scene.

"We heard it was a shooting, an hour later we heard a child was involved; it's just heartbreaking," said Mike, a motorist.

The CHP says the child was likely caught in the crossfire of a freeway gunfight, saying in a statement:

"Evidence collected on the northbound side of the freeway may indicate the victims were not targeted and the child passenger was struck by a stray bullet."

The family was too upset to be interviewed but told us off camera, they want those responsible to surrender.

"The reality is, this is insanity. I see it everyday, gang activity has risen, especially when it comes to little ones, someone's family member, it's unacceptable," said Gallo.

The CHP is requesting tips from the public to help catch those involved in the gunfight, while a East Bay family mourns the unthinkable loss of an energetic little boy with a big smile.