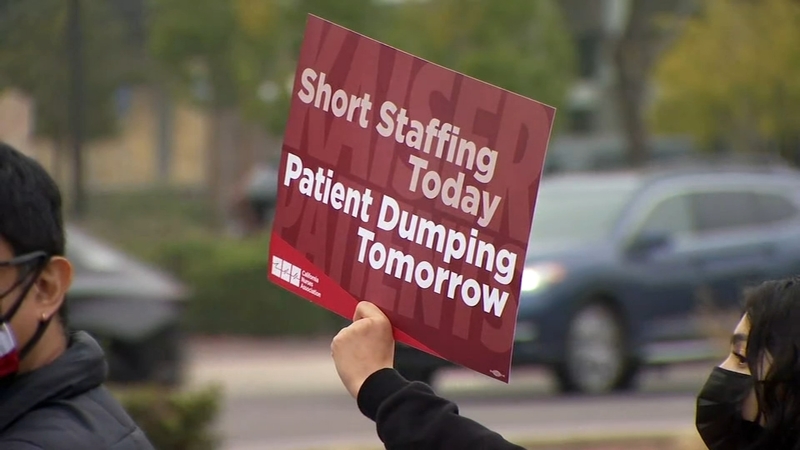 The strike is happening in Fresno, plus several Kaiser locations across California.

Hundreds of Kaiser Permanente workers outside the northeast Fresno facility chanted: "No contract, no peace!"

According to SEIU United Healthcare Workers, they aren't happy with how bargaining is playing out with Kaiser and Local 39 engineers.

"We believe that an injury to one is an injury to all of us," said Melanie Reno, a cytotechnologist. "They play a critical role in maintaining our facilities and the equipment we use to care for our patients, things like our beds, the fire system. Everything in that hospital runs because these guys fix it."

Thursday marked the 63rd day engineers have been on strike, with no paycheck in hand.

"Kaiser decided that they came to the table with a pretty poor offer, the day before the end of our contract, in the hopes that we would just go ahead and approve it," explained stationary engineer Patrick Gale.

According to Kaiser, it's offering Local 39 employees wages similar to other employees, at an average of more than $180,000 in total wages and benefits.

A few hours after workers went on strike Thursday, Kaiser released a statement: "Unfortunately, after many hours bargaining on Tuesday and Wednesday, there is no movement in negotiations with Local 39. The union insists it receive much more - in some cases nearly two times more - than other union agreements covering Kaiser Permanente employees."

Gale, along with SEIU United Healthcare Workers, hopes Kaiser will come up with more than what was offered in the last contract.

"It wasn't anywhere near what the cost of living increase would be," he said.

According to the union, it's the largest sympathy strike in the country.

Kaiser workers said they would remain on strike until 7 a.m. Friday.

"To ensure we are able to provide the care needed, we are taking steps to scale down on some non-urgent services for November 18 and 19," said Michelle Gaskill-Hames, the senior vice president of Kaiser Permanente's Hospital and Health Plan Operations. "We've been able to safely transfer and admit Kaiser Permanente patients to unaffected hospitals."

She said patients would be contacted if a procedure or appointment was canceled. The hospital and ER departments will remain open.