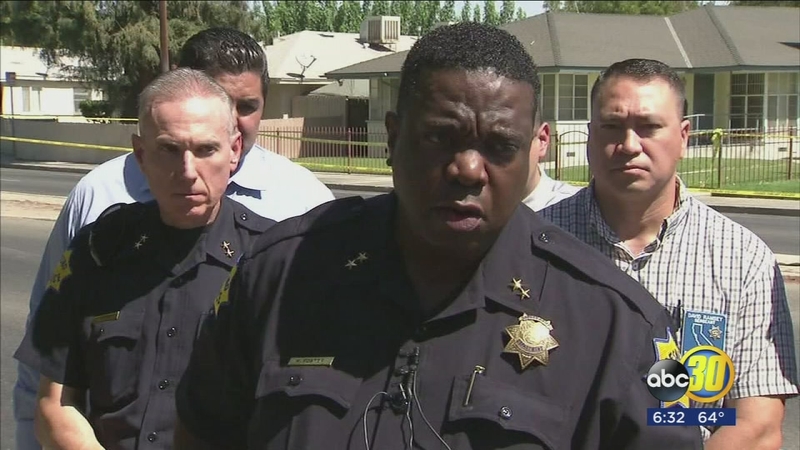 FRESNO, Calif. (KFSN) -- A judge sentenced him after considering all factors to two 48 month terms to be served concurrently.

Keith Foster was convicted last May on conspiracy to traffic heroin and marijuana. Foster is required to turn himself in before January 13th to serve his sentence.

Foster showed no emotion and did not cry during sentencing.

'The truth will prevail. God is good.' Keith Foster leaving court after being sentenced to 4 years.

Foster's attorney believes there wasn't enough evidence to bring the case to trial in the first place. He blamed federal agents, Foster's original attorney, and the Fresno Bee for his client's conviction. He also argued Foster was unfairly treated because he was Fresno's Deputy Police Chief when he committed the crimes.

Referencing the Sentencing of Keith Foster

"This has been a very painful chapter in the history of the Fresno Police Department, and for me personally. It is my hope that we are able to put this behind us, learn from it, and never to be repeated again."

Following the sentencing, the Department of Justice issued the following press release:

"Earlier this year, a jury found Keith Foster guilty of violating the very laws he was sworn to enforce. By conspiring with others to distribute illegal drugs, Foster breached the trust that the community placed in him as deputy chief of the Fresno Police Department and invited the danger and violence associated with such activity into our neighborhoods," said U.S. Attorney Talbert.

"Like other law enforcement officers we have convicted for similar crimes in this district, Foster abused his position of trust for his own financial gain," U.S. Attorney Talbert continued. "Given that the abuse of methamphetamine, opioids, and other drugs causes such immense harm to our community, we will zealously prosecute those in such positions who put profit over duty. I am grateful for the hard work of the ATF and the FBI, together with the full cooperation of Fresno Police Chief Jerry Dyer, in bringing Foster to justice. My office is committed to working with our law enforcement partners to investigate and prosecute public corruption to the fullest extent of the law."

"Our mission at ATF is to protect the public from violent criminals and criminal organizations," said Assistant Special Agent in Charge Brice McCracken, San Francisco Field Division, Bureau of Alcohol, Tobacco, Firearms and Explosives. "In the pursuit of our commitment to the public, ATF special agents, alongside our partners at the FBI, followed evidence of a drug trafficking conspiracy that was occurring within the community. That investigation led directly to the former Deputy Police Chief of Fresno Keith Foster. Keith Foster's actions jeopardized public safety and violated the trust of the citizens of Fresno he swore to protect. Today he faces the consequences for breaking that trust. However, his actions are not indicative of the Fresno Police Department and they will not deter ATF's partnership with the department."

"The American people expect law enforcement officers to obey the laws they are sworn to uphold, protect the public, and to serve as role models for their communities," said Special Agent in Charge Sean Ragan of the FBI Sacramento Field Office. "Keith Foster abused the power and reputation of his position as deputy chief by engaging in drug trafficking, a crime that invites violence into the community he swore to protect and serve. Public corruption is an important and top criminal priority for the FBI, and we are grateful to those who bring allegations of public corruption to our attention."

According to evidence presented at trial, between July 19, 2014, and March 26, 2015, Keith Foster conspired with his nephew Iran Dennis "Denny" Foster, 46, of Fresno, to obtain marijuana from Ricky Reynolds, 50, of Shasta Lake. Denny Foster regularly traveled to Reynolds' residence to purchase marijuana. On one of these trips, Denny Foster was stopped by the California Highway Patrol in Merced County and arrested for possessing six pounds of marijuana in the trunk of his car. When he was arrested, his passenger called Keith Foster and Foster said that he "could have provided cover" for Denny Foster if he had known about the trip ahead of time. He also said he would call his "narc guys."

Also according to evidence presented at trial, between December 23, 2014, and February 2, 2015, Foster conspired with co-defendant Rafael Guzman, 43, of Fresno, to obtain heroin for another person.

This case was the product of an investigation by the Bureau of Alcohol, Tobacco, Firearms and Explosives and the Federal Bureau of Investigation. Assistant United States Attorneys Melanie L. Alsworth and Dawrence W. Rice Jr. are prosecuting the case.