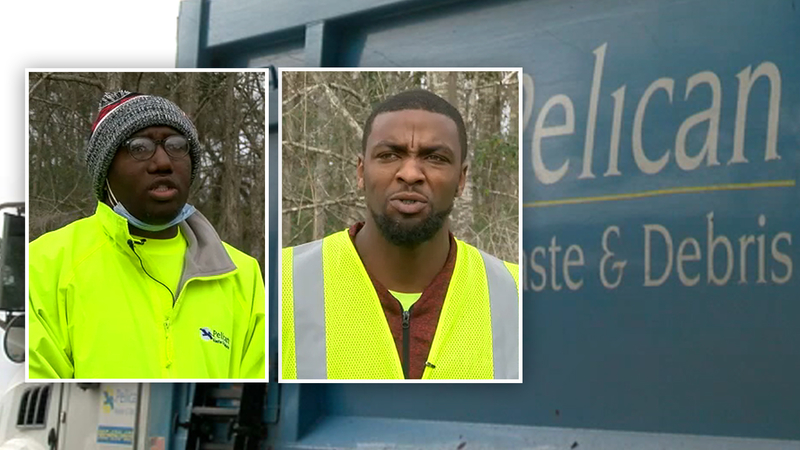 The two Pelican Waste and Debris workers sprang into action when they recognized the car she was taken in after seeing the vehicle described in an Amber Alert out in a field while on their trash route Monday morning.

"Something told me, 'Just look.' I said 'What's that car doing way ducked off in in the field like that?''' Dion Merrick said.

"And he was like, 'B, you know what I just saw... man, that looks like that silver Nissan on the Amber Alert,'" Brandon Antoine recalled.

Merrick immediately started a livestream on Facebook when he noticed the Nissan in an empty field, KATC reports. The car matched the description in the Amber Alert sent late the night before.

"I called 911 at the same time, backed my [garbage] truck up in the driveway to make sure he didn't get out," Merrick said. "I talked to the 911 operator and she basically told me it would be about a minute before a deputy was going to be on the scene."

Both men are fathers and say what happened strikes close to home. They said the decision to get involved was a no-brainer.

"Thank God, man, because I got a little girl. I'm on my job doing what I got to do," Merrick said in the livestream.

The suspect, 33-year-old Michael Sereal, is listed on the parish's sex offender database and was convicted in 2016.

In Merrick's livestream video, Sereal could be heard yelling "Why are you doing this to me?" as police took him into custody.

Jalisa Lasalle, 10, went missing from a family member's home between 1 and 2 p.m. the day before the men spotted the suspect vehicle.

She is now safe because of the workers who decided not to look the other way.

Pelican CEO Roddie Matherne praised his employees in a statement to ABC News.

"We couldn't be prouder of Dion and Brandon," Matherne said in an email. "In fact, All of our Pelican Waste team have been heroically working without fail during the pandemic quietly, professionally, and consistently serving the communities where we collect garbage & debris. They often respond in other ways while on the road. This was an exceptional thing that may very well have saved a little girl's [life]."
Report a correction or typo
Related topics:
louisianagarbageherokidnapkidnappingrescueamber alertchild rescuesanitation worker
Copyright © 2022 KFSN-TV. All Rights Reserved.
KIDNAPPING
Man kidnapped, carjacked by armed suspect in Visalia
Man arrested for allegedly attacking girlfriend in Avenal
Man accused of kidnapping 8-year-old girl near Merced park
Kidnapping of Bay Area teen at gas station was a prank, police say
TOP STORIES
Shooting at Tulare Co. gas station was a shootout between rival gangs
Man accused of killing 75-year-old father near Porterville
10 injured in PA bridge collapse; human chain formed to help
Fresno man sues, blames recalled vehicle for severe injuries
How many times can I reuse my N95 mask?
Fire damages Fresno County home
Fresno City Council agrees to purchase 2 more motels to house homeless
Show More
38-year-old man arrested after standoff with Fresno police
Reparations are for descendants of Black slaves: California official
Police searching for man who tried to rob Merced Walgreens, Chevron
Kings River snowpack above average for end of January
12-year-old boy hit by car in southeast Fresno, police say
More TOP STORIES News