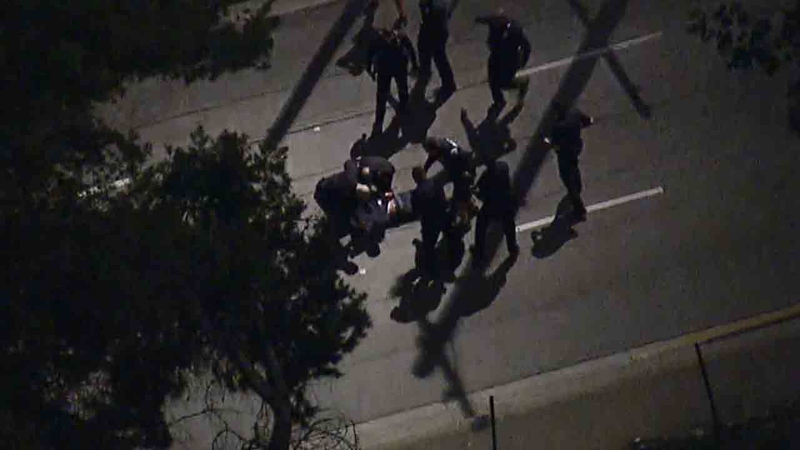 MONTEBELLO, Calif. -- A gunman driving a suspected stolen car was shot multiple times by more than one police officer after trying to flee on foot and carjack at least two motorists on the 60 Freeway in Montebello Monday.

The suspect, described as a male Hispanic between 30 and 35 years old, was taken to a local hospital by ambulance. His condition remains unknown.

The pursuit began near First and Soto streets in Boyle Heights around 5:40 p.m. after officers ran the suspect's license plate and concluded the gray Toyota Camry had been reported stolen.

The suspect led LAPD officers on a chase through downtown Los Angeles, hitting at least four vehicles before crashing his vehicle and carjacking a woman at gunpoint near Imperial Highway in South Gate.

Elizabeth Yarahuan, 22, was carjacked by an armed suspect during a stolen vehicle pursuit near Imperial Highway in South Gate Monday, Feb. 9, 2015.

The carjacking victim was later identified as 22-year-old Elizabeth Yarahuan.

"He just came up to me and pointed the gun at me and told me to get out of my car, and he just took off with it," Yarahuan said. "He was pointing the gun at me so I just got off the car and ran. I was just scared he was going to hurt me."

Maggie Barroso witnessed the carjacking as it unfolded in front of her.

"He tried to carjack the car in front of her. He couldn't open [the door] so the driver just took off, and then after I saw him running to her car. He did the same thing and he was just pointing [the gun] right at her," Barroso said. "And then, you know, after when everything happened I saw her, she was completely shaken up, and the least I can do is come and assist her."

Officers followed the suspect, who drove on the wrong side of the road several times, on the 710 and 60 freeways while helicopters followed him overhead.

The pursuit ended near the Findlay Avenue off-ramp after the suspect became wedged in traffic. He then tried to flee on foot and carjack another motorist before officers opened fire at about 6 p.m. The suspect was quickly surrounded by officers. A firearm was recovered at the scene.

"Anytime that you're confronted with someone that is armed, be it a knife, be it a sharp object or a gun, and they wanna take your property, be it a purse or vehicle, it's not worth losing your life over property," Preciado said.

The investigation is being led by the Los Angeles Police Department.