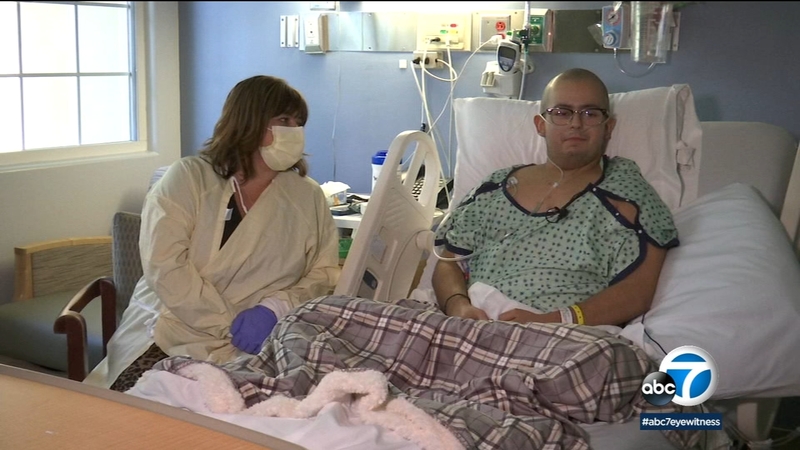 LOS ANGELES -- Tamarra Alvarado's son enlisted in the U.S. Air Force to defend the United States. Now she's defending him from an unexpected attack on his health.

Over the summer, the now 21-year-old graduated from the Air Force Fire Academy and became ill when he went home for leave.

"I already wasn't feeling that well during the academy," said George Alvarado.

Soon after, he was diagnosed with leukemia.

"It was my battle to sit here and cure my son," said Alvarado as she sat by George's bedside at City of Hope in Duarte.

The Whittier native received an outpouring of support.

"I'm just lucky that I have my mom and my friends," George said.

Some of his friends even shaved their heads in solidarity, and keep him company at the hospital.

He's in remission but his doctor says the risk of relapse is high.

"If his leukemia comes back, the only chance to kill the leukemia is stem-cell transplant," said Dr. Auayporn Nademanee.

His ethnic background plays a role in finding the perfect bone marrow donor.

Tamarra's mother is German and her father is Mexican. Donors with the same ethnicity have a higher chance of being a perfect match. His brother is only a 50% match and his doctor says that could present complications.

Tamarra, a nurse and single mother, is relentless.

"I went to police stations, sheriffs' stations, people randomly walking on the street. I went to tell my son's story," she said.

George looks forward to returning to the Air Force. He's also considering becoming a nurse because of the impact their kindness has had on him during his treatment. He wore a beaded bracelet on his wrist his mother gifted him.

"It's a little prayer bracelet to take care of him," said Tamarra.

She has faith that someone who watches or reads this story could help find George his perfect match.

"We're just asking God and asking the people, the public to just take that chance," she said. "I keep telling him we will. We'll fight because we will find that match."