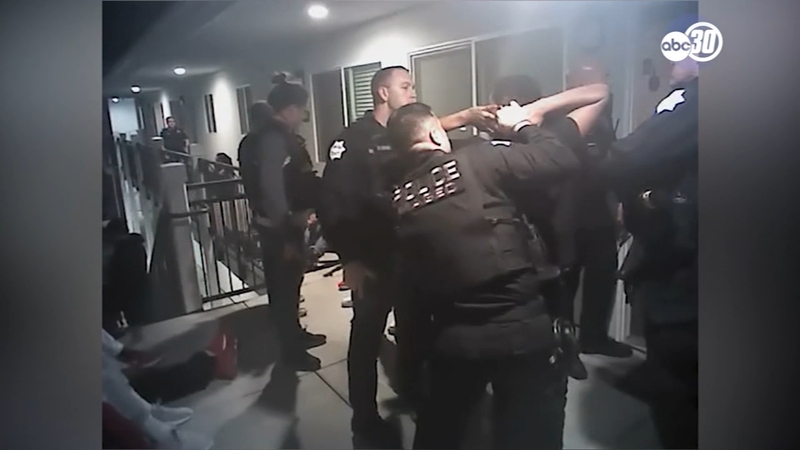 The auditor delayed his report by almost three months, citing concerns about the community reaction, but the city released it Thursday after public outcry.

And members of the Black community expressed frustration about the delay even after the report came out.

Fresno police officers launched a probation search in the middle of a birthday party in January 2019 and searched everyone they found for weapons.

But what they did after patting down 17-year-old London Wallace led to several investigations.

A lawsuit from Wallace uncovered several body camera videos and Action News acquired them months after the incident.

His lawyer says they start out showing several people sitting and complying with police.

"All of the officers are concerned about the subjects because there are so many of them, that they may get out of control, when it was Officer Martinez who lost his temper and was out of control," said the attorney, Nolan Kane.
Christopher Martinez threw seven punches, according to investigators.

Internal affairs initially cleared him of doing anything wrong except not activating his body camera.

They changed their finding after a review by Police Chief Andy Hall showed a violation of policy for use of discretion.

The Office of Independent Review found Martinez used unreasonable force, but auditor John Gliatta chose not to make his findings public in July, citing concerns about community reaction as people across the country protested police violence.

"That he chose to sit on that because he thought a riot would break out, that's insulting to the community members who live every day in the city whether that's in fear or in praise of the police department or neutrally," said D'Aungillique Jackson, the president of the Fresno State NAACP chapter and the chair of the Community Input Committee of the recently formed police reform commission.

He said punches four through seven could've been avoided since Wallace was in a defensive position and no longer a threat.

But Gliatta cleared Martinez of falsifying his police report despite acknowledging incorrect information in the report.

"We believe that Gliatta should be fired," Jackson said. "He should be replaced absolutely. We also believe we should really be looking at hiring an independent reviewer that's not connected to a police department."

Audits from the former Fresno County Sheriff's Office crime analyst are not binding, but Chief Hall says he takes them seriously, just like he took this case.

"While state law prohibits me from disclosing personnel decisions involving discipline or corrective action arising from use of force incidents, I can assure the community appropriate action has been taken to address the level of force applied in the incident involving London Wallace," the chief said in a statement emailed to Action News.