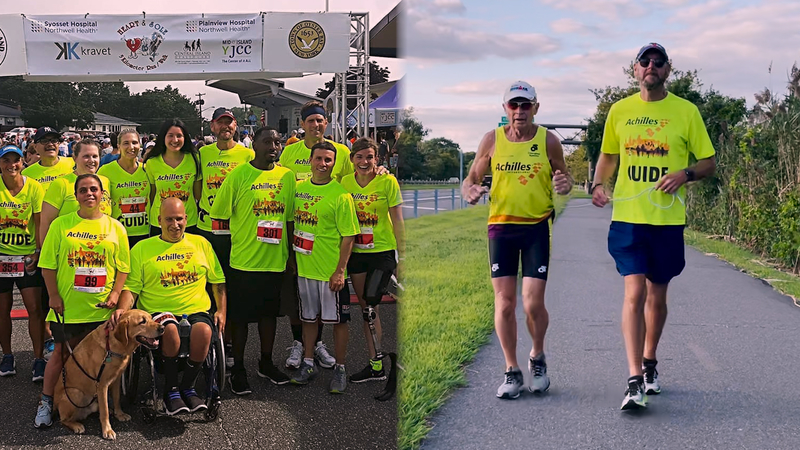 Breaking barriers for athletes with disabilities

SEAFORD, New York -- What started with only two runners training for the marathon pre-covid has turned into a full-fledged Long Island running chapter with Achilles.

Achilles is an organization, which empowers people with disabilities to participate in mainstream running events.

In the fall of 2019, blind veteran Adriel Fernandez and Achilles running partner John Reynolds started training on Long Island since the commute to get to Central Park was too much for Fernandez to do on his own.

The duo ran on their own since Long Island didn't have an Achilles chapter.

Related: Long Island veteran is on a roll with Vice, his new coffee and doughnut food truck

This was until, President of the Long Island chapter, James Barile, decided he would be the one to create it.

"I wanted to join the Long Island chapter, and there wasn't one," said Barile. "That was the impedes to start the chapter, and we've been training every Saturday since then."

As soon as the Long Island Achilles chapter got up and running, more and more athletes with disabilities started to join.

They were relieved to have an organization like this close to home finally.

"Having a disability, sometimes you feel alone, you know like you are the only one going through what you're going through," said Fernandez. "Having this here on Long Island is great because it's so much closer and that now you get to meet people who are local to you. You find more people that are in your neighborhood that you don't even know about."

Since their first practice earlier this year, the group has now grown to more than 15 athletes including guides as well.

"I would like anybody to come and learn more about Achilles, " said Charlie Plaskon, a blind triathlete who recently joined the group.