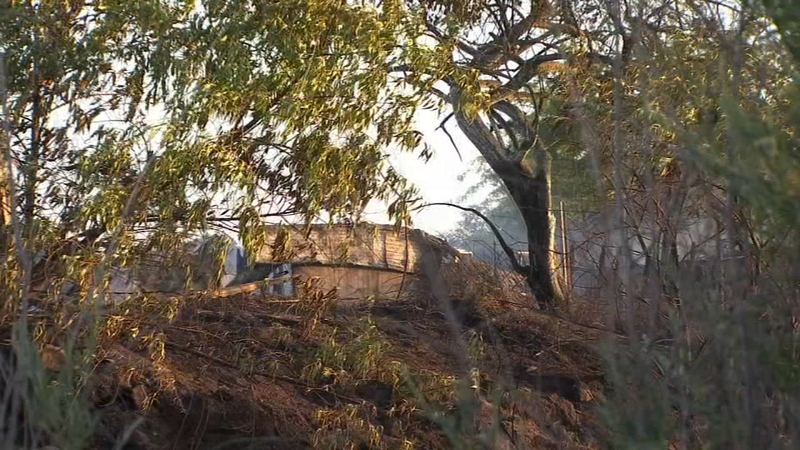 MADERA, Calif. (KFSN) -- Residents of Riverview Drive in Madera packed city council chambers Wednesday night, demanding that the city take immediate action to clean up the riverbed that runs behind their homes to prevent another destructive fire like this.

The area is rampant with dry brush frequented by homeless. City manager Arnoldo Rodriguez said the city needs approval from the California Department of Fish and Wildlife to clear the vegetation from the riverbed, a permit the city claims it's been efforting for years.

Rodriguez said minutes before Wednesday's council meeting, he received word that approval was granted after Fish and Wildlife learned of Tuesday's brush fires that destroyed two homes and damaged several other properties.

Wednesday evening, the Madera city manager got emergency verbal approval from California's Department of Fish and Wildlife to start cleaning up the riverbed.

Residents who live on Riverview Drive say the clean-up should have happened years ago. Mike Varlas showed us how close the fire came to burning his home. He's holding city leaders accountable.

Neighbors say they live in fear of what could happen next.

"Coming from farm labor camps to where I am living, I am proud of what we have and it just hurts," says Mary Sandoval. "It hurts that we have to be scared to live where we live."

But prior to now, city officials say red tape and orders from the state kept them from taking action, especially during the height of the pandemic.

"For two years, we were ordered not to touch, disturb or move the homeless," says Madera Police Chief Dino Lawson.

Several families who live along the riverbed are left to salvage what they can and rebuild.

The city manager says that the immediate cleanup of the riverbed will be paid for with money from the general fund. But the city has been approved for an $820,000 grant for future cleanup of the riverbed.
Report a correction or typo
Related topics:
maderawildfire
Copyright © 2022 KFSN-TV. All Rights Reserved.
TOP STORIES
1 killed, multiple hospitalized after fiery crash in Merced Co.: CHP
Madera parents plead guilty in death of 2-year-old Thaddeus Sran
50 migrants die after 18-wheeler abandoned in Texas heat
Witness: Trump grabbed steering wheel, demanded to go to Capitol
4 dead, 150 injured after Amtrak train derails in Missouri
Fresno's food truck community comes together to support Planet Vegan
'Safe and sane' fireworks officially on sale in Valley
Show More
Legislators moving forward with audit of CSU system
37 pounds of pills believed to be fentanyl found in Merced County: CHP
Why you should pay down your credit cards right now
Valley father drowns while swimming in Fresno County pond
Epstein associate Ghislaine Maxwell sentenced to 20 years in prison
More TOP STORIES News