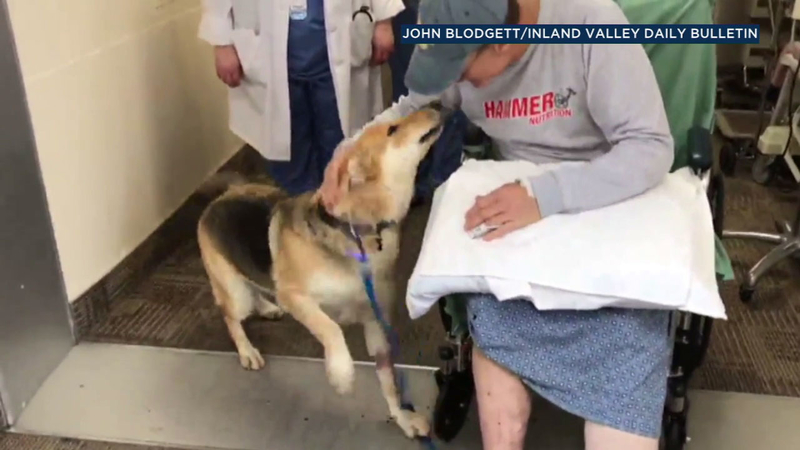 The last time Warren Muldoon saw his beloved dog Dakota, she was soaking wet and freezing, mournfully watching him from a mountain ledge as he was hoisted up to a rescue helicopter.

Muldoon, 62, had been badly injured while hiking on Mount Baldy with his German shepherd mix. He broke his leg and five ribs and punctured his lung in a series of falls that separated him from his dog.

Hours later, when a group of hikers stumbled upon him and managed to contact rescuers, neither they nor authorities could reach Dakota on her ledge.

He had to be rushed out of there to save his life as his body temperature dropped precipitously and he faced the risk of hypothermia.

Dakota was left behind.

Muldoon recalled his ordeal to the Inland Valley Daily Bulletin.

"I could see Dakota just standing there looking at me," Muldoon told the paper. "It just broke my heart to leave her."

She was a poignant reminder of Muldoon's son, James, who died in a motorcycle crash last year.

James had asked his parents, Warren and Connie, to look after Dakota if anything ever happened to him.

That night, after Connie visited her husband in the hospital and learned Dakota had been left behind, she posted their plight on Facebook.

By the next day, some experienced hikers had seen the post and took it upon themselves to search for Dakota on the mountain.

It took time, effort and a lot of dedicated searching, but they were finally able to locate Dakota stuck on a ledge near some waterfalls.

They lured her to them with a package of salami and were able to tie her up and bring her off the mountain.

Muldoon's injuries prevented him from being immediately reunited with Dakota, but when he was, it was an emotional day.

As soon as she spotted Muldoon in his wheelchair, she ran up to him, tail wagging furiously. She jumped up to him, ran around excitedly and sniffed at the cast on his leg.

As for Muldoon, he isn't planning to go hiking with her again.

And he's incredibly grateful for the rescuers who saved his life as well as the volunteers who found Dakota.