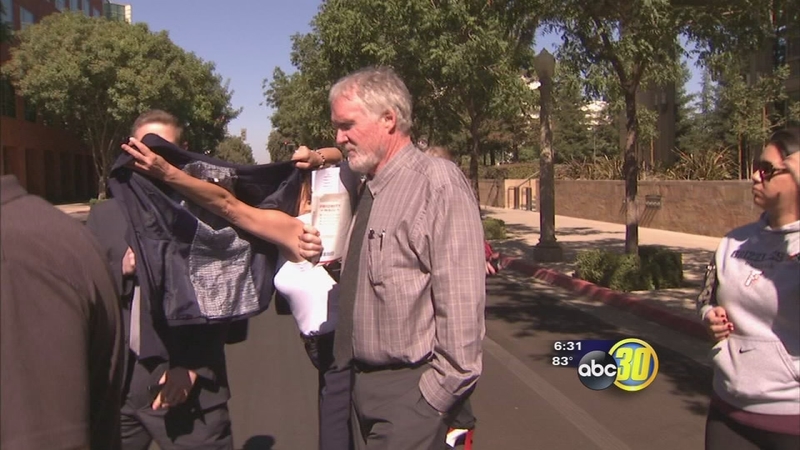 "How did it happen that 300 pills went to somebody who didn't exist?" an Action News reporter asked Dr. Terrill Brown.

"It's a fantasy," Brown said after our crew made its way through his supporters who tried to prevent us from asking about the crime.

Dr. Brown was best known as a medical marijuana doctor, but he'll go to prison for more powerful painkillers and financial cheating.

"Dr. Brown did you want to say anything about the sentence?" a reporter asked.

"He has no comment," said one of his supporters.

Dr. Brown is known as a mellow man, so we had no reason to suspect this encounter would escalate.

The former emergency room doctor admits he started really making money when he left the ER and became the Valley's go-to cannabis doctor.

But his medical career came to a screeching halt when federal agents caught him prescribing oxycodone and hydrocodone without even examining patients.

"He was just writing these prescriptions to make as much money as he could," said ABC30 legal analyst Tony Capozzi. "Again, what he was doing is hurting people in society."

Prosecutors say Brown prescribed 600 pills to a person who doesn't exist, and he's a key player in a ring sending prescription pills all over the West Coast. Capozzi is defending the main distributor in the ring.

The government seized more than $180,000 and three luxury cars and a judge sentenced Brown to 57 months in prison.

Dr. Brown was allowed to walk out the front doors of the federal courthouse after his sentencing so Action News tried to ask him a couple questions. His supporters didn't think we should be asking him anything.

"They said you prescribed Oxy and Norco to a nonexistent person," the reporter said as one of Brown's supporters started singing to drown out the questions.

"How can a medical doctor prescribe to a non-existent person?" the reporter asked.

"It's not true?" the reporter asked.

"That's not true," the doctor said.

The charges to which he pleaded guilty say it is, though.

Brown is due to turn himself in to federal custody in November. Three years after his release, he'll be allowed to reapply for his medical license.