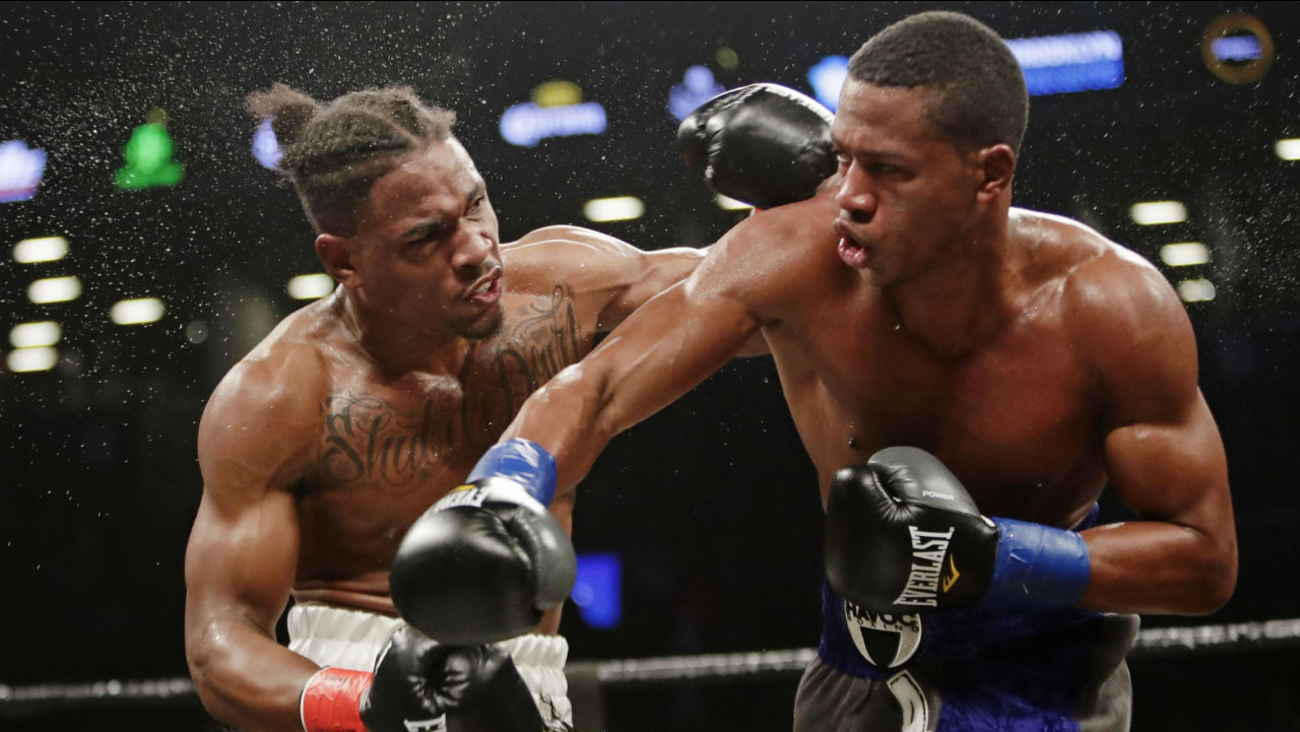 FILE - In this March 3, 2018, file photo, Patrick Day, right, follows through on a right to Kyrone Davis during a boxing match in New York.

CHICAGO -- A boxer from Long Island with an impressive professional resume died Wednesday, four days after suffering a traumatic brain injury during a fight in Chicago.

Promoter Lou DiBella said Patrick Day, of Freeport, died at Northwestern Memorial Hospital after sustaining head injuries in a bout with Charles Conwell. He was 27.

"He was surrounded by his family, close friends and members of his boxing team, including his mentor, friend and trainer Joe Higgins," DiBella said in a statement on his website. "He was a son, brother, and good friend to many. Pat's kindness, positivity and generosity of spirit made a lasting impression with everyone he met."

DiBella said Day underwent emergency surgery after getting viciously knocked out in the 10th round Saturday.

Fighting on the undercard of Oleksandr Usyk's heavyweight debut against Chazz Witherspoon, Conwell landed a right hand early in the round that caused Day to stumble. Seconds later, Conwell landed a left hook that knocked Day to the canvas.

The junior middleweight was taken from the ring on a stretcher.

It wasn't clear if he regained consciousness. He was treated by a doctor in the ring and then transported to the hospital. Day was knocked down twice earlier in the fight.

DiBella said on his verified Twitter account Sunday: "Pat Day makes any room he is in a better place. I've never met anyone who's met Patrick and not liked him. Never heard him utter a mean word. Never saw him greet someone without a big smile. Life doesn't seem fair sometimes. Please keep Pat in your prayers, thoughts, and hearts."

Two days after the fight, Conwell posted a heartfelt message to Day on social media.

In his statement, DiBella conveyed thanks for the outpouring of "support, prayers and offers of assistance from all corners of the boxing community." He asked that the privacy of Day and his family be respected at this difficult time.

Eddie Hearn, the managing director of the promoter, Matchroom Sport, said after the bout that Day never gave up in the bout.

Day has been recognized as one of Long Island's finest professional fighters and was also a fixture in the boxing community throughout New York City.

Day had a career record of 17-4-1 with six knockouts. As an amateur, he won two Nationals titles, the New York Golden Gloves tournament and was a U.S. Olympic team alternate in 2012.