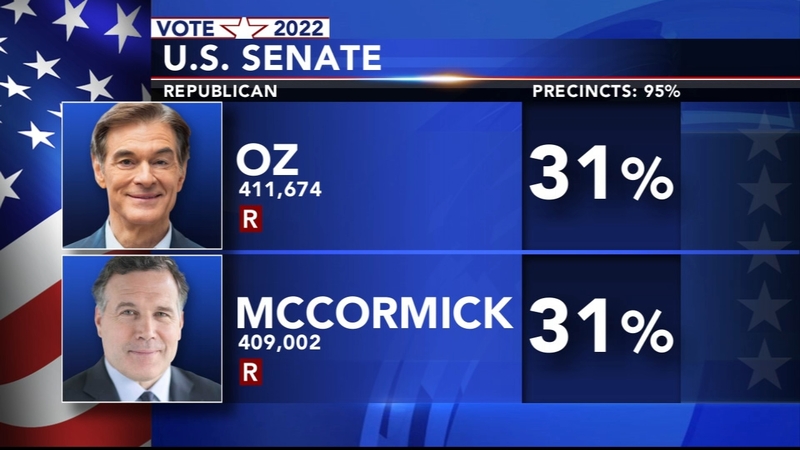 The night's most closely watched race in Pennsylvania's GOP Senate contest is still too close to call.

Pennsylvania law requires recounts when the margin between the top two candidates is 0.5 percentage points or less. With just a few hundred votes separating Oz and McCormick, the result may not be clear for several days.

The winner will face Democratic challenger John Fetterman, who won his party's nomination days after suffering a stroke.

"We're not gonna have a result tonight," Oz said shortly before midnight, before vowing to former President Donald Trump, "I will make you proud."

Oz had been locked in an expensive battle with McCormick. But Barnette, who has drawn the support of Trump backers suspicious of Oz's ideological shifts, stunned the political world with a late surge that upended the race in the final weeks as she tries to become the first Black Republican woman elected to the Senate.

Mehmet Oz addressing supporters now … saying there is no result but when the votes are tallied he’s confident they will win. https://t.co/Hdnl8DlUYd pic.twitter.com/Rve1BmeHwA

Barnette, who voted in Huntingdon Valley on Tuesday morning, has repeated false claims the 2020 election was stolen.

In recent days, pictures have emerged of Barnette apparently marching near members of the Proud Boys on Jan. 6, 2021. ABC News has verified the images that were first shared by an independent researcher.

She denied any connection to the Proud Boys to another network.

Kathy Barnette trails behind Mehmet Oz, Dave McCormick in Pa. GOP Senate contest. Dann Cuellar has the latest on Action News at 11 p.m. on May 17, 2022.