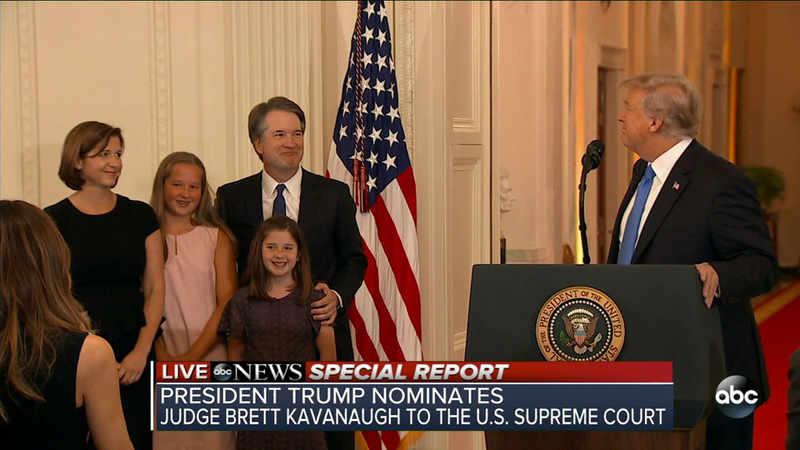 President Donald Trump has nominated Brett Kavanaugh to be the next Associate Justice of the Supreme Court of the United States.

The announcement came in a prime-time TV announcement that will ignite a fierce confirmation battle in the weeks to come.

RELATED: Supreme Court nomination process: How a new justice gets on the bench

Kavanaugh is a longtime fixture of the Republican legal establishment. He has been a judge on the federal appeals court in Washington since 2006. He also was a key aide to Kenneth Starr during his investigation of President Bill Clinton and worked in the White House during George W. Bush's presidency.

Some conservatives have expressed concerns about Kavanaugh questioning his commitment to social issues like abortion and noting his time serving under President George W. Bush as evidence he is a more establishment choice. But his supporters cite his experience and wide range of legal opinions.

ABC News Special Report - President Donald Trump has nominated Brett Kavanaugh to be the next Associate Justice of the Supreme Court of the United States.

The President's pick came after a weekend deliberating with aides and calling allies for advice.

Mr. Trump's choice would replace Justice Anthony Kennedy, who is retiring from the high court at the end of the month. Kennedy had long been considered the court's "swing" vote, siding with the liberal justices on gay rights and abortion, but with conservatives on voting rights and campaign spending. Kavanaugh was a former clerk for Justice Kennedy.

If confirmed, Kavanaugh, could cement a conservative majority on the court for years to come. It will be a fierce confirmation battle as Democrats focus on the nominee's views of the high court's Roe v. Wade ruling legalizing abortion.