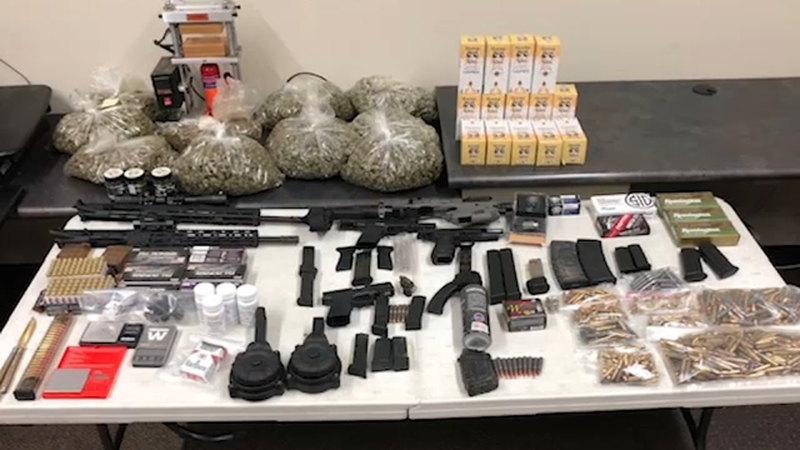 PORTERVILLE, Calif. (KFSN) -- After a lengthy investigation, the Porterville Police Department seized over 11 pounds of marijuana, over 600 Xanax pills, five firearms, 18 large-capacity magazines, and over 1,200 rounds of Ammunition.

In March, they received a tip about drug deals in their area.

After a lengthy investigation, a few days ago, a group of three suspects were arrested and booked into the South County Detention Facility for the use and sale of drugs and guns.

"Last week, the narcotics unit of the department executed several search warrants in the city and around the city," said Lt. Mark Azevedo.

On Thursday, one suspect, 21-year-old Daniel Contreras from Porterville, was arrested for Possession of Cocaine, Marijuana, and Xanax for Sale, growing marijuana, and having tear gas, large capacity magazines Ammunition. He was found during a traffic stop in the city of Lindsay, which led to a search warrant at his home.

The second suspect, 26-year-old Michael Villarreal from Plainview, was arrested the same day on several weapons possession charges and for sales of Cocaine and Xanax.

Friday, detectives made their way to a third home, where they detained 22-year-old Alisha Magana from Lindsay.

She was arrested on weapons charges.

All three suspected have posted bail.

"When these drugs hit the streets, they have a detrimental effect on the community at large. At least, in this case, we were able to get those drugs off the street."