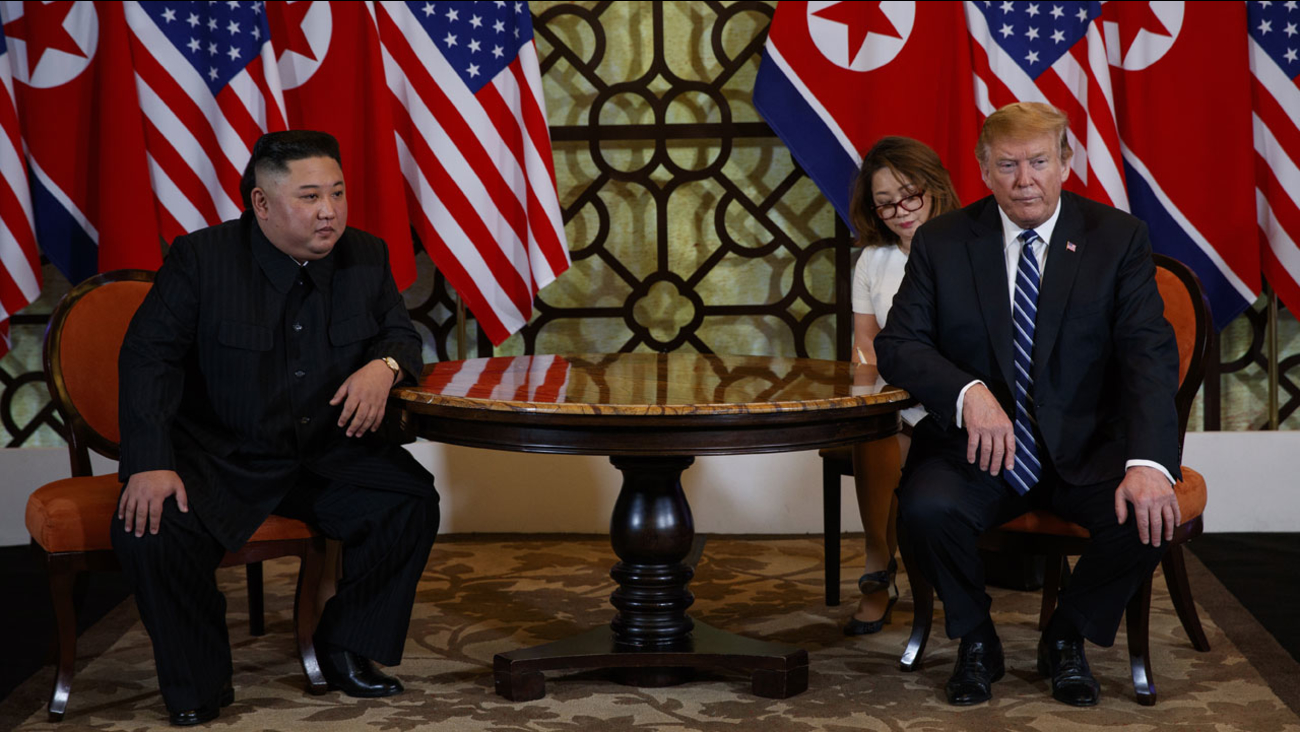 President Donald Trump won't commit to saying the U.S. is demanding complete, verifiable and irreversible denuclearization of North Korea before removing sanctions on that country.

Trump spoke Thursday at a news conference in Hanoi, Vietnam, after he announced that he had walked away from his second summit with North Korean leader Kim Jong Un without a deal being reached.

Trump says: "I don't want to put myself in that position from the standpoint of negotiation."

Trump and other U.S. officials have long maintained that denuclearization was a prerequisite to lifting sanctions on North Korea. Trump said earlier that U.S. sanctions were the sticking point in the talks with Kim.

U.S. President Donald Trump says he has not committed to a third summit with North Korean leader Kim Jong Un after their second summit ended early without a deal.

Trump told reporters at a news conference in Hanoi, Vietnam, on Thursday at the end of two days of talks that "we'll see if it happens," but that he has "not committed."

As for any further meetings, Trump says, "It might be soon. It might not be for a long time."

Trump took questions from reporters after talks with Kim ended early. Trump says that Kim asked the U.S. to lift sanctions in exchange for certain steps toward denuclearization. Trump says he refused.

President Donald Trump is explaining the abrupt and early end to his Vietnamese summit with North Korea's Kim Jong Un by telling reporters: "Sometimes you have to walk."

Trump said Thursday that North Korea wanted him to lift U.S. sanctions on the country in exchange for denuclearization, but he wasn't willing to do that.

Still, he says Kim assured him he'll continue to hold off on nuclear and missile tests.

U.S. Secretary of State Mike Pompeo said Thursday at the news conference in Hanoi that he wishes the two sides could have gotten further.

He says they asked Kim to do more and "he was unprepared to do that."

U.S. President Donald Trump and North Korea's Kim Jong Un have failed to reach an agreement at their second summit in Vietnam, but talks between the two nations will continue in the future.

White House press secretary Sarah Sanders says the two leaders discussed denuclearization of the Korean Peninsula. She adds: "No agreement was reached at this time, but their respective teams look forward to meeting in the future."

Still, Sanders is describing the meetings between Trump and Kim as "very good and constructive."

The leaders had been expected to hold a working lunch as well as attend a joint agreement signing ceremony at the Hanoi Metropole hotel on Thursday. Instead, they departed in separate motorcades within minutes of each other after doing neither.

White House press secretary Sarah Sanders told reporters before Trump departed that there had been a "program change," but she did not provide further explanation about what had prompted the upheaval or whether any deals had been agreed to.

Trump is scheduled to hold a news conference at 2 p.m. - two hours earlier than originally scheduled - before he departs Hanoi.

White House press secretary Sarah Sanders told reporters on Thursday that "negotiations are still ongoing" between the two delegations. Trump and Kim were scheduled to have lunch but did not enter the dining room where reporters were assembled.

Sanders says Trump will return with his delegation to his hotel soon, providing no updates on a scheduled joint signing with Kim that had been on the books for 2 p.m.

Sanders says Trump's press conference, which had been scheduled for 4 p.m., has now been moved to 2 p.m. at his hotel.

A spokesman for Moon said Thursday that the call could take place shortly before Trump departs Vietnam or when he's aboard the presidential plane.

Moon is desperate for a breakthrough in nuclear negotiations between Washington and Pyongyang so he can continue to push engagement with North Korea. Moon recently told Trump in a phone conversation that the South was ready to proceed with inter-Korean economic projects to induce further nuclear disarmament steps from the North.

Moon's announcement is planned for a Friday ceremony marking the 100th anniversary of a 1919 uprising by Koreans against Japan's colonial rule and will likely include plans for economic cooperation between the rival Koreas.

Moon is desperate for a breakthrough in nuclear negotiations between Washington and Pyongyang so he can continue engagement with North Korea. He has driven the three-way diplomacy but is now held back by tough U.S.-led sanctions against the North.

Kim and Trump are meeting Thursday in Vietnam as they inch closer toward establishing formal ties.

President Donald Trump says it's "a good idea" for the U.S. to open a liaison office in North Korea, as Kim Jong Un calls the notion "welcomable."

In an unprecedented question-and-answer session with reporters Thursday in Vietnam, the two leaders of the technically-warring countries inched closer toward establishing formal ties.

Asked by an American reporter if he was willing to allow the U.S. to open an office in Pyongyang, Kim said through a translator, "I think that is something which is welcomable."

Trump says that he considers it "a good idea," adding that it should happen "both ways."

Earlier Thursday, Kim said he wouldn't be holding a summit with Trump if he weren't willing to make good on his denuclearization pledge.

North Korean leader Kim Jong Un says he wouldn't be holding a second summit with President Donald Trump if he weren't willing to make good on his denuclearization pledge.

Asked by a U.S. reporter Thursday in Hanoi whether he's willing to denuclearize, Kim responded: "If I'm not willing to do that, I won't be here right now."

Trump told reporters that that's what the two are discussing during their second day of talks.

Kim was also asked if the leaders would be talking about human rights, which he's accused of abusing. But Trump responded to the question instead, telling reporters: "We're discussing everything."

The comments came as the two met with an expanded coterie of aides, including U.S. Secretary of State Mike Pompeo and national security adviser John Bolton.

North Korean leader Kim Jong Un has answered a question from a foreign journalist almost certainly for the first time ahead of his high-stakes nuclear summit with U.S. President Donald Trump.

When asked by a member of the White House press pool about his outlook on the summit on Thursday, Kim said: "It's too early to say. I won't make predictions. But I instinctively feel that a good outcome will be produced."

South Korea's Unification Ministry, which deals with affairs with North Korea, couldn't confirm whether it was the first time Kim answered a question from a foreign journalist.

But reporters didn't get opportunities to ask questions of Kim during his three summits with South Korean President Moon Jae-in and his four meetings with Chinese President Xi Jinping. Kim ignored questions shouted at him during his first summit with Trump last June in Singapore.

U.S. President Donald Trump and North Korea's Kim Jong Un appeared more relaxed as they convened near the pool of the luxury Vietnamese hotel where they're holding their second summit.

Trump and Kim emerged after their first formal bilateral meeting Thursday morning on the Metropole hotel's pool patio, where they were joined by U.S. Secretary of State Mike Pompeo and North Korean official Kim Yong Chol.

The group then went into a glass-enclosed area and sat down around a table for more talks.

Trump told reporters earlier that he's in no rush for progress, saying: "What's important is that we do the right deal."

Trump and Kim will later be holding a working lunch and appearing at a joint-agreement signing ceremony later in the day.

Trump will hold a news conference before boarding his flight home.

Trump and Kim met Thursday, the morning after they opened the summit in Vietnam.

Trump told reporters that "a lot of great ideas" are "being thrown about." He says, "When you have a good relationship, a lot of good things happen."

The president also said he's in "no rush" to make "the right deal," a sharp break from his heated rhetoric a year ago about the threat posed by Pyongyang.