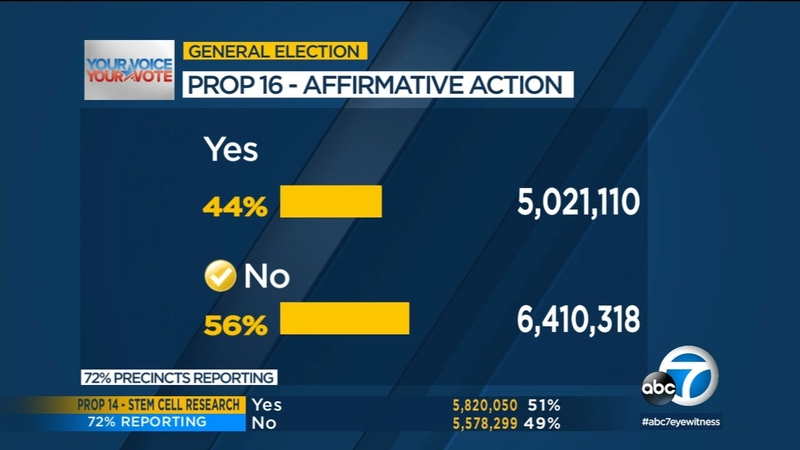 Proposition 16, a ballot measure that would've reinstated affirmative action in California government, was rejected by voters.

The "no" votes had more than 56% of more than 11 million votes counted as of early Wednesday morning.

With more than 11 million votes tallied Wednesday, Proposition 16 had only 44% approval, while the opposition had about 56%, indicating voters were not ready to repeal a quarter-century-old ban on affirmative action.

The measure had aimed to once again allow race, ethnicity and gender to be considered in admissions to state colleges and universities, as well as state contracts and public jobs.

Prop. 16 was designed to repeal Proposition 209, which California voters approved in 1996. That measure prohibited considerations of race, ethnicity and gender in those public fields.

Supporters of Prop. 16 argued it is necessary to address deep-seated racial inequalities that still exist in California.

Opponents said all Californians should be treated equally regardless of race and bringing back affirmative action would have the opposite effect.

For a deeper look at the arguments on both sides watch the video above.

CA PROPS: Everything to know about the 2020 ballot measures
App users: For a better experience, click here to view the full map in a new window