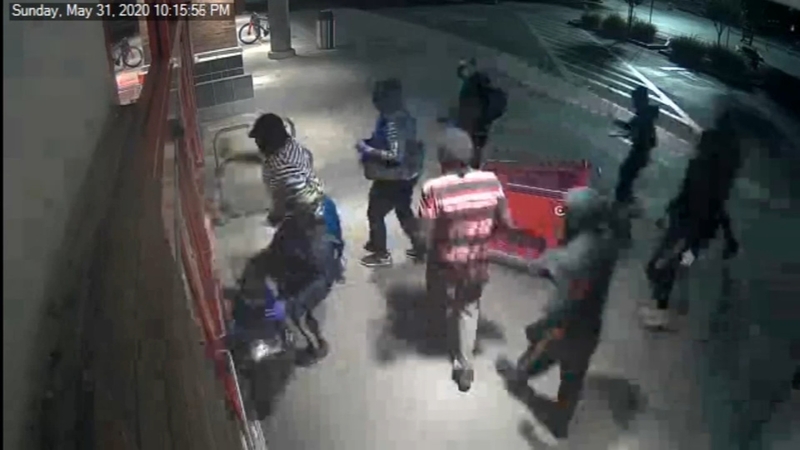 FRESNO, Calif. (KFSN) -- Some of the protests across the country have been loosely linked to looting, and local police are watching out for it here in the Valley.

Thieves struck at a couple of malls Sunday night.

The Target at Sierra Vista Mall closed early Sunday, but employees kept their eyes on the store remotely.

"And they noticed there were 10-15 people who had come through the front door, broken through the glass, and they went back to the electronics department," said Lt. Jim Munro of the Clovis Police Department.

They grabbed some of those electronics, plus clothing, and maybe alcohol and then left through the back door. Clovis police call it a case of looting.

They used video from Target and other businesses and from city cameras to get some leads on the suspects even though most wore hoodies, and masks like a lot of people wear during the coronavirus pandemic.

Less than an hour later, Fresno police got a call about 10-15 people in Fig Garden Village.

They found broken glass at The Vault jewelry store and a trail of evidence.

"There was some jewelry located in the parking lot leading away from the business that clearly was part of the burglary," said Sgt. Jeff La Blue of the Fresno Police Department.

In the same shopping center, suspects used a hammer to break the door at the CVS pharmacy, but they left without going in.

Police believe officers pulling into the parking lot scared the thieves away. They're classifying the crimes as a burglary and a vandalism, not as looting.

Businesses across the Valley are bracing for burglars and damage, like at Big 5 and Western Dental in a southeast Fresno neighborhood.

"The whole city is kind of on high alert, I guess, but we're maintaining the same controls we normally do," said Sgt. La Blue.

That means they're gathering intelligence - following up on every lead from social media or email or anywhere else.

They've seen the rumors of upcoming violence and they're ready to respond if it's real.

They've added extra tactical and undercover officers near shopping centers. In the evenings, for now, they'll only respond to emergency calls.

They also expect to make arrests in at least one of the burglaries -- none of which are connected to any protests, as far as police know.
Report a correction or typo
Related topics:
fresnoclovisclovis police departmentprotestrobberylootingfresno police department
Copyright © 2021 KFSN-TV. All Rights Reserved.
PROTEST
Livingston residents demand answers as police chief is placed on leave
Kaiser reaches deal to avoid strike involving 1,200 pharmacists
Rev. Jesse Jackson hospitalized after falling at protest
Rev. Jesse Jackson released from hospital after falling at protest
TOP STORIES
2 accused in deadly shooting at Hilmar restaurant arrested
Major outage hits Amazon Web Services; many sites affected
'Political free-for-all' as Rep. Nunes leaves House of Representatives
50 mutations in omicron could be its downfall, data shows
Biden to warn Putin of economic pain if he invades Ukraine
2 arrested for string of business burglaries in Merced
Tulare Co. deputies investigating armed robbery at Delano gas station
Show More
Clovis Navy test pilot is one of NASA's new astronauts
Devin Nunes stepping down from Congress by end of 2021
Police investigating theft of decorations on Clovis' Candy Cane Lane
Authorities identify 4 killed in plane crash near Visalia airport
Why feds are warning it could take months to get a passport
More TOP STORIES News