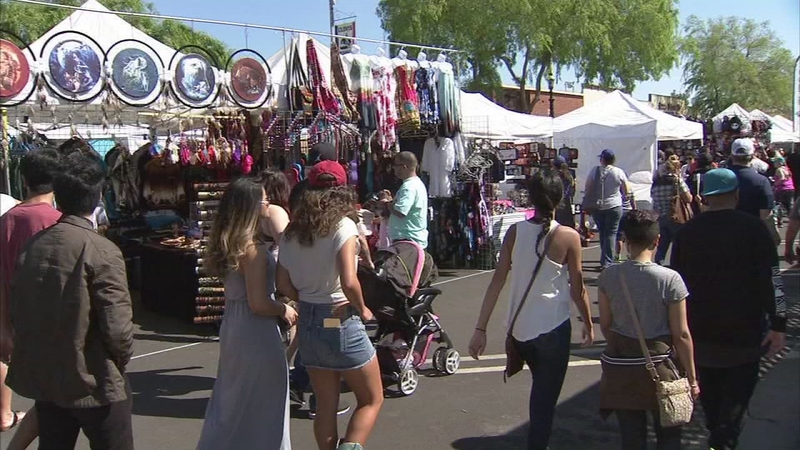 FRESNO, Calif. (KFSN) -- No matter how much rain is expected this weekend some big events will not let that damper their plans.

One of the biggest events takes place this weekend in Old Town Clovis for Big Hat Days. The thought of rain this weekend was on the mind of organizers Friday for the two-day event.

Diana Hunnicutt with the Clovis Chamber of Commerce says no matter what the event will go on and vendors are prepared.

"Many of these vendors travel all over. I mean this is their job. They travel from event to the other and most of these events are outdoors. So they are prepared. Many will probably have an extra cover for their products. They are prepared to be in the rain."

Big Hat Days will have nearly 400 vendors ready to go from arts and crafts to food and drinks.

Each one has a spot marked on Pollasky Avenue. The only concern is the chalk outline disappearing.

"Possibly these streets, the markings could be washed away. But we did extra markings on it. A little bit thicker. We're hoping that it does stay enough so at least we have the spots marked for the vendors coming in," said Hunnicutt.

Riders and runners in the California Classic Weekend picked up their registration packets early on Friday while organizers mapped out a detour for the 1500 riders expected.

The Director of California Classic Weekend, Mike Herman, said Saturday's route no longer go through Squaw Valley due to heavy rain and wind.

The storm is expected to move out by Sunday for the half marathon, relay and 5K run in Downtown and Central Fresno.

Since the California Classic began eight years ago this is the first time they had to deal with rain.

"Originally we had it in March. We moved it to May before but May became a challenge because of the heat. So we kind of settled it in between in April for the last three years," said Herman.