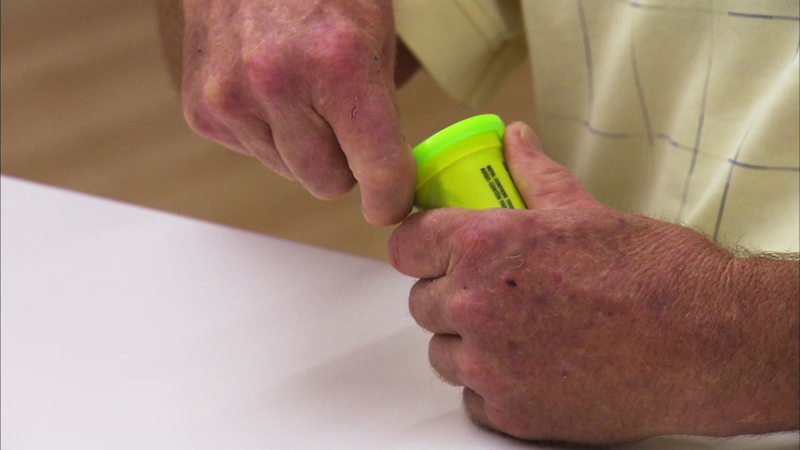 DOWNEY, Calif. -- If you're one of the nearly 800,000 Americans who suffer a stroke each year, simple tasks can be a struggle.

"I couldn't walk for 2 weeks," said La Crescenta resident Graham Pugh, who suffered a stroke in 2014. "I couldn't talk. It was bad."

Graham has come a long way, but still has limited use of his right arm and hand, and struggles with everyday activities such as opening a jar or cutting his food.

"It is work every day," Pugh said."It's stress for me, mainly 'cause I'll never be like I was. I played football, I did all this stuff. Now, I can't do anything."

But now there might be hope. A clinical trial is taking place at Rancho Los Amigos Rehabilitation Center in Downey, one of just 15 centers in the U.S. and U.K. taking part, with the hope that stroke victims can regain use of their limbs.

For decades, the only real treatment for stroke has been physical therapy. But that ignores that part of the body that controls those limbs - the brain.

"Now we understand that when you move the hand, you send signals to the brain and the brain naturally receives these signals and the brain changes," said Dr. Charles Liu, chair of neurosurgery at Rancho Los Amigos. "But you always wonder what could be achieved if you had a push-pull phenomenon where you could actually apply some sort of modulation or stimulation to the brain, which is where the site of the injury is, and if the combination of the peripheral exercises in the central stimulation could be synergistic."

It's called the Vivistim system in which a small device called a neurostimulator - often used for epilepsy patients - is implanted in the chest and connected in the neck to the vagus nerve that connects directly to the brain.

During physical therapy, a therapist sends a signal, basically trying to re-teach the brain how to once again control stroke-affected limbs.

It has researchers and participants quite hopeful.

"What I can do for other people if it works?" Pugh said. "It'd be great for millions of people if it really works."

The clinical trial is still accepting patients. Participants must have had a stroke at least nine months ago, but not more than 10 years ago and struggle with hand and arm movement.