Rash of robberies, 10 robberies in Fresno within a month 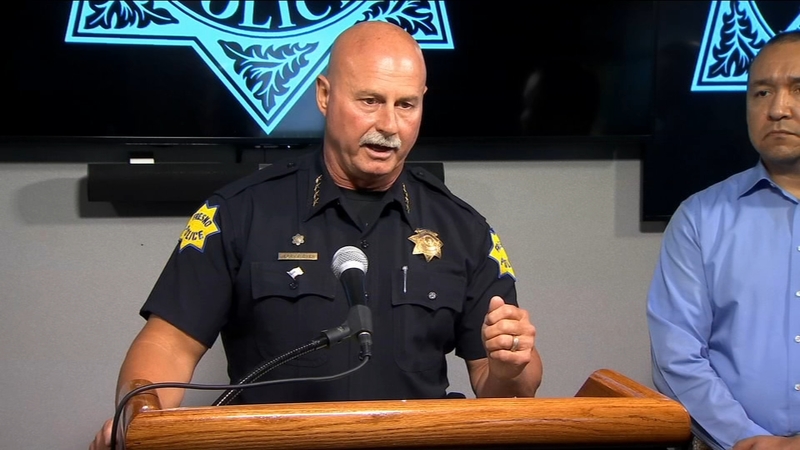 FRESNO, Calif. (KFSN) -- In the last month, there have been 10 robberies in Fresno.

Fresno Police Chief Jerry Dyer explained that at least six of these robberies were committed by two separate groups.

Dyer said the first group of suspects started their robbery spree on August 8, at the Taco Bell on E. Kings Canyon.

He said the two suspects walked into the fast-food chain and were armed.

Investigators said the suspects stole cash and before leaving fired one round into the ceiling.

The second robbery happened at the G Mart, on N. Maple Ave. on August 15 and the third robbery occurred at Bishop's Liquor on N. First Street on August 18.

"In each of these three robberies there were two black male adults who entered the store armed with a combination of either a pistol grip rifle, a pistol grip shotgun and a handgun," Chief Dyer said.

Dyer said that in each of the three robberies the suspects wore very distinct clothing.

"What's unique is that they were exchanging clothing in each of the robberies. So suspect one would be wearing a distinct set of clothing on the first robbery and on the second robbery maybe the other suspect, who had a different build was wearing that clothing," he said.

Investigators were able to grab fingerprints from the scene and identified of the suspects as 29-year-old James Ashley.

"A search warrant was executed...there was distinct clothing that was recovered in the residence that was worn in the robbery as well as clothing in the vehicle, again that was also used in the robbery," Dyer explained.

Ashley was arrested and booked into the Fresno County Jail for armed robbery as well as being a felon in possession of a firearm.

Police are still asking for the public's help to find the second suspect.

Chief Dyer said that his officers are also investigating another set of robberies at a Baskin Robbins on Shields Ave, a KFC on N. West, and possibly a Little Ceasers Pizza also on N. West.

Police were able to identify the two suspects at 27-year-old Jerome Harris and 16-year-old Ezekiel Harper. They are wanted for armed robbery.

In addition to those six robberies, there were four others in the city of Fresno.

One robbery was at a T-Mobile store Blackstone Ave.

"A day after that robbery we were able to arrest a 16-year-old in possession of one of the stolen phones from a customer. He has been booked for robbery," he explained. "A short time later there was a robbery of a T-Mobile in Livermore. The Livermore Police Department arrested four additional suspects in that case".

Dyer said that robbery series has been put to an end.

However, there are more suspects still on the run in separate robberies.

Dyer said in all these robberies at least one suspect was armed.

One robbery happened on Aug. 7 at a Chevron on E. Ventura. The suspects are described as two Hispanic males.

Another robbery happened on Aug. 16 at the Arco on Clinton and Fruit. The suspects are described as two Hispanic males.

Then on Aug. 20, Mike's Liquor on N. Palm was robbed. Dyer said the suspect appear to be two Hispanic male juveniles

"There are a number of reasons as to what's driving these individuals to commit robberies, certainly drug addiction is one but I also believe the second is excitement," Chief Dyer said.
Report a correction or typo
Copyright © 2021 KFSN-TV. All Rights Reserved.
More Videos
From CNN Newsource affiliates
TOP STORIES