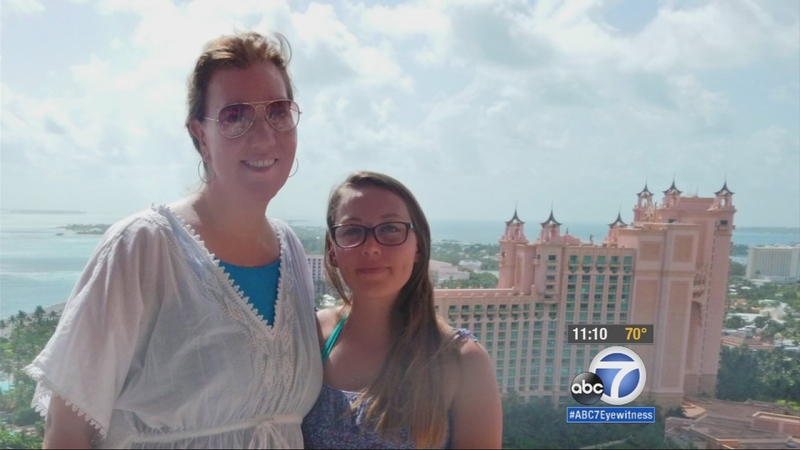 VALENICA, Calif. -- Christy O'Donnell described her recent trip to the Bahamas to celebrate her daughter's 21st birthday as "a dream come true."

When O'Donnell was diagnosed with terminal lung cancer last year, her doctor predicted that she'd likely not live to see her daughter Bailey's big day.

"Always in the back of your mind is the very present thought that pretty much was our last vacation together," O'Donnell said.

At the time, O'Donnell wrote out a birthday card for her daughter to open -- with or without her.

"In that moment, watching her open that gift, I think for me, that was the most touching moment, as a mom, because I really didn't think I would get to make it," O'Donnell said.

They shared a drink to mark the moment.

"We got to be on the beach together, where she took her first drink. Her first legal drink," O'Donnell said.

They visited the Atlantis Resort in the Bahamas, where they swam with dolphins and floated down the lazy river.

"We were just hugging and she looked at me and she said, 'Oh mom, I just don't want to leave!' Its exactly how I felt. For one week, we got to be away from reality, we didn't have to talk about cancer," she said.

Now that she's back home in Valencia, she's reminded of her upcoming reality of excruciating pain.

O'Donnell is fighting to give California doctors the right to prescribe medication that allows patients to choose when to end their own lives.

"The time for me is when the pain and the treatment is so excruciating that I have to take so much pain medication that I'm essentially, pretty much out of it," she said.

O'Donnell continued: "If I can't talk to my daughter, I can't reach out and touch her and hug, I can't go to dinner with her, I can't eat, I can't go out of the bed to go the bathroom myself, I can't clean myself... That's not a quality of life!"

O'Donnell is supporting right-to-die legislation that is currently being considered in Sacramento.

The bill recently stalled in the California Assembly.

Some doctors worry that it infringes on their commitment to "do no harm."

The first of four remaining votes on the legislation is scheduled for July 7. Gov. Jerry Brown has not yet taken a public position.

O'Donnell doesn't believe this should be a partisan political issue.

"Its a human personal choice about how you want to spend your last hours, minutes and days," she said.

Even if the bill eventually passes, it will likely not become the law soon enough to help O'Donnell. Her attorney is suing the state for immediate relief.

Her first hearing is scheduled for July 24 -- her 47th birthday.

"If my body is able, I will be there on my birthday down in San Diego," she said. "I want them to put a face with who they're talking about."

In the meantime, O'Donnell vows to keep talking about the issue.

O'Donnell said since Eyewitness News first profiled her in May, several cancer survivors have thanked her for speaking out. They're offering to lend their voices to the fight.

"If you believe in an issue and you keep it to yourself and you don't talk about it to anyone, you don't stand up for it, you're afraid people are going to look at you the wrong way or judge you, you're not living a fulfilled life," she said.