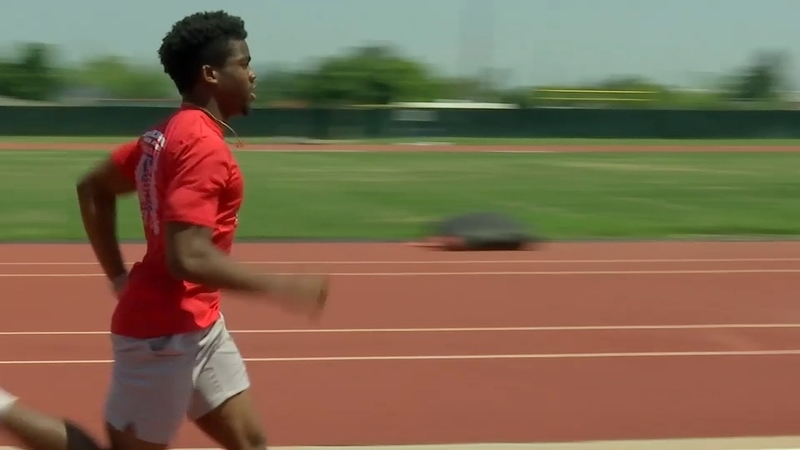 SANGER, Calif. (KFSN) -- Sanger Apache Kosi Agina is nominated for the B'nai B'rith award. He holds the school record for the triple jump and will play for Fresno State's football team this fall.

Agina is one of five siblings. All five have competed on the track and field team for Sanger.

"The Agina kids look at weight and they grow muscle, it's crazy," says Clay Manning, head track and field coach.

One of Kosi's older sisters is the school's record holder in high jump. He followed in her footsteps, setting the school record for triple jump his sophomore year at the state meet.

"My coaches were like, 'You broke the school record, I was like, 'Oh shoot'. I'm on the back of the teacher, now it's amazing," he says.

Kosi was eyeing his third straight trip to the state tournament before the track season got canceled. The senior wanted to break two school records, beat his previous triple jump mark, and chase the 4X1 relay record from the '90s.

The two-sport athlete has also dedicated his time to his schoolwork, carrying a 4.1-grade point average. Kosi is a member of the Black Student Union, Interact Club, and is a church volunteer.

"I almost feel like he makes that part look easier than the athletics," says Manning.

"My parents have always been on me for my grades, I've been able to do the grades and do well on the track and field," says Kosi.

While Kosi may not be continuing his track career at the next level, he is looking forward to competing for the Fresno State football team.

"I know the players that played for Sanger Eric Mosbey and Jalen Cropper. So I can't wait to put on a legacy over there and continue to put on for Sanger," says Kosi.

Bulldog fans will be happy to know that the defensive back has been training hard for the upcoming season.

"So this is the first year I've had him in the weight room, it's fun to watch him lift," says Manning.