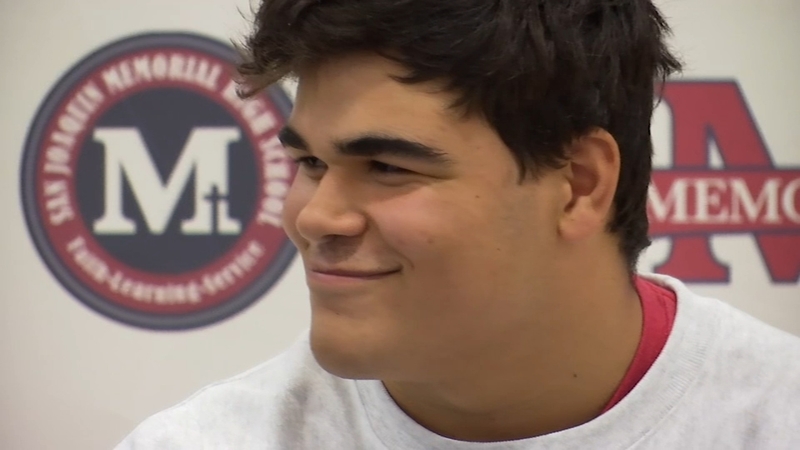 Like a number of incoming freshmen, this one is prepping for fall football in a new way.

"I couldn't be more excited. It's been my dream since I was in the third grade," says San Joaquin Memorial's Tobin Phillips.

Phillips is as excited today as he was back on signing day.

"It's been my dream school ever since I could remember," he says.

The defensive end, who was the anchor of the Panthers defense for the last two years, will head next year to Stanford.

"Obviously he loves football and is a good football player but academics come first and that's why Stanford was so appealing for him. It was a perfect match for what he wanted academically as well as football," says Panthers head football coach Anthony Gosten.

With one week to go at Memorial, Phillips is balancing his remaining classes along with his upcoming responsibilities.

"I do my workout and the running and lifting probably takes about 2 hours and the rest of the time, I'm stretching or watching film and we've been having weekly defensive line meetings with my coach at Stanford, so I've been learning the playbook every day. It's a lot to take in but it's real fun to learn," he says.

Adds Coach Gosten: "It's rare to coach a kid who works so hard, is so humble, has the talent. Academically is off the charts. Those type of student athletes don't come along quite as often and so when you get one in your program you treasure it."

Rare for a program - but seemingly par for the course in the Phillips family.

He is nominated for the B'nai B'rith student athlete award - something his sister Georgia, who plays water polo at UCLA, won two years ago.

"Two years ago I was at the ceremony and it was real special just how big a deal it was and it just means a lot to this community and all the schools in the area and it would be an honor to win it," he says.
Report a correction or typo
Related topics:
sportssports
Copyright © 2022 KFSN-TV. All Rights Reserved.
SPORTS
Novak Djokovic leaves Australia after court rejects visa challenge
Michelle Kwan announces birth of her first child
Fresno State men's basketball game vs. Wyoming postponed
Valley native Jalen Green gives his own shoe to excited fan in stands
TOP STORIES
Website for free COVID tests is here. How does it work?
Biden to hold press conference today to mark first year in office
Merced police searching for missing 87-year-old man
Man suffered severe burns after explosion at Table Mountain Casino
Man hit by car in northwest Fresno
Suspects caught on camera stealing from Kohl's in northwest Fresno
Domestic violence suspect arrested after standoff with Fresno police
Show More
Some CA residents encounter problems ordering COVID tests
Man accused of killing 2 in Fresno County booked in LA County jail
Body of Missy Hernandez recovered from aqueduct near Huron
All 3 suspects arrested in connection to Tulare County murder
Suspect in Visalia triple homicide pleads not guilty to murder charges
More TOP STORIES News