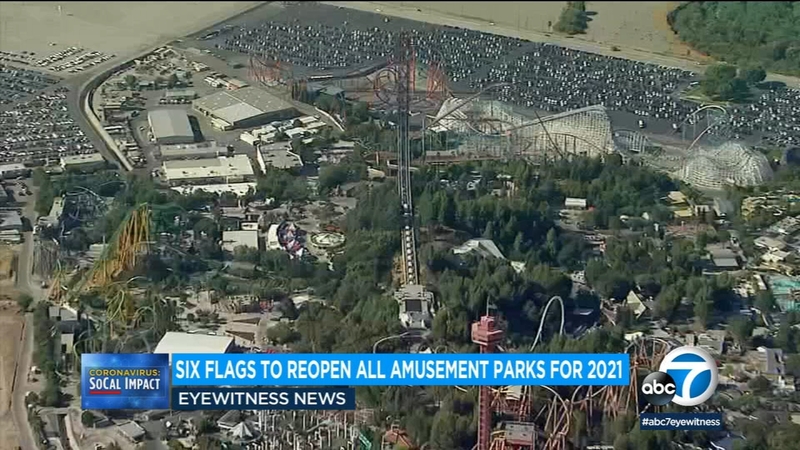 VALENCIA, Calif. -- Six Flags says it is planning to open all 26 of its amusement parks and water parks for the 2021 season, including Magic Mountain in Valencia.

However, Magic Mountain says no firm reopening dates have been set. The theme park still needs approval from the state before reopening.

Under California's color-coded tier system, smaller amusement parks - with a capacity under 15,000 - can reopen when a region reaches the Orange, or moderate tier.

Larger parks must wait until the next tier is achieved, Yellow, or minimal cases. Parks like Six Flags have been closed for almost 11 months.

As of Tuesday, the most recent update from the state, Los Angeles County was in the state's Purple tier -- the most restrictive -- with an adjusted daily case rate of 20 new cases per 100,000 residents.

Erin Guerrero, executive director at California Attractions and Parks Association, said, "I think there's some optimism given the numbers and vaccine rollout but nothing concrete."

Bonnie Weber, senior vice president of Park Operations, said in a release that the company is working with state and local officials to set firm reopening dates for its parks in California, Illinois, Massachusetts, Mexico City and Canada.

Six Flags Entertainment Corporation said it worked with scientists to develop a reopening plan that "meets or exceeds federal, state, and local guidelines for sanitization, hygiene, and social distancing protocols."

Six Flags will limit the number of people in its parks and guests will have to make reservations before their visits. Masks will be required for all workers and guests and they will also have to pass temperature checks, according to its website.

The company is also taking steps to encourage social distancing on rides, in lines and seating areas and other areas around its parks.

Six Flags is hiring thousands of workers to operate its rides, restaurants and other attractions at its parks in the United States Mexico and Canada, according to a news release.

"Our guests and team members are ready for the return of fun and signature Six Flags thrills in 2021," Weber said. "Last year, we set the standard for operating our parks safely, and entertained millions of guests in adherence to government, and CDC health guidelines at 21 of our 26 parks. We offered a local and outdoor entertainment venue spanning dozens to hundreds of acres where families and friends could safely spend time together."