The plumes of smoke could be seen all the way from Clovis.
KFSN
By ABC30.Com Staff 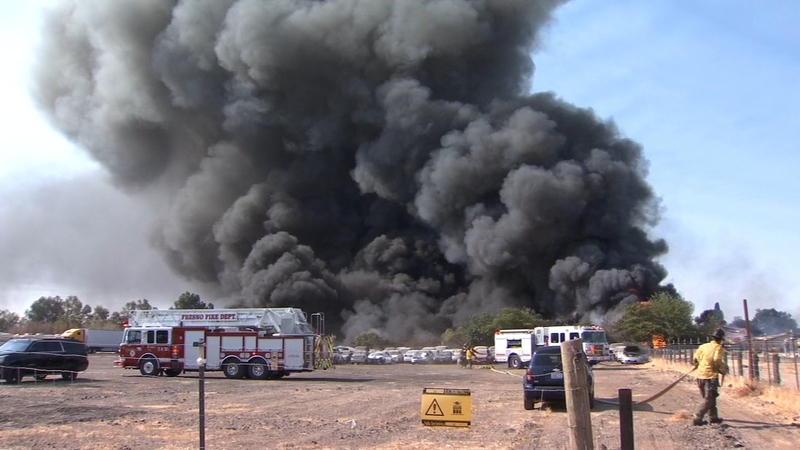 FRESNO, Calif. (KFSN) -- A 49-year-old woman has been arrested for allegedly setting a fire that sent thick, dark smoke above Fresno on Monday morning.

The huge clouds of smoke hung above the city and could be seen from miles away - even as far as Highway 168 in Clovis.
The fire was sparked at Olive and Marks in west central Fresno at about 8:45 am.

Around 35-40 firefighters from North Central Fire, Fresno Fire and County Fire came together to fight the flames.

More than 35 firefighters are on scene. We’re told it’s burned a mixture of grass, vehicles, trailers and buildings. Still unknown what caused the fire, but firefighters are getting a handle on it (the plume of smoke has shrunk considerably over the past half hour). @ABC30 https://t.co/gPFbnDyi2z pic.twitter.com/wDWaLS9w7C

Authorities say a witness flagged down a CHP officer and pointed out the suspect. Firefighters described the blaze as an 'outside debris fire' and say it burned a mixture of grass, vehicles, trailers and buildings.

"The property has a large accumulation of inoperable vehicle and trailers involved, making containment challenging," CAL FIRE said in a post.

A view from above of the area torched by the fire shows just that.
EMBED More News Videos

You can see scores of charred and blackened vehicles parked haphazardly in the area as fire trucks send sprays of water from the outer fringes and above.

Witnesses said the smoke resembled storm clouds above the high-rises in downtown Fresno.