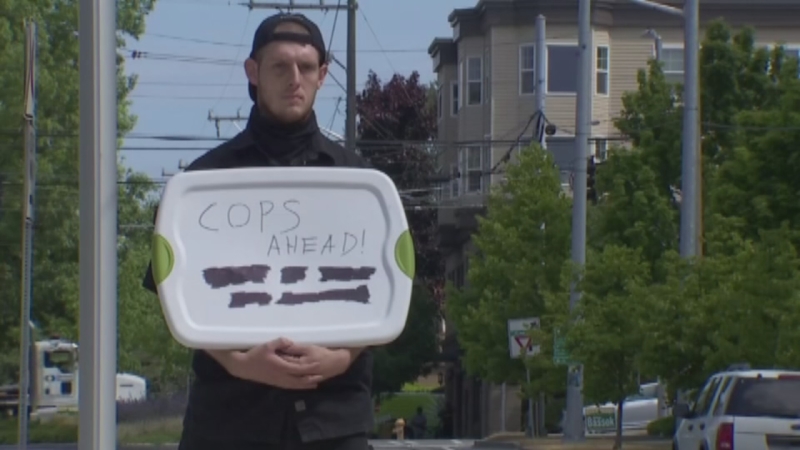 SEATTLE -- A Seattle man was given a ticket for holding up a sign to warn motorists off to an impending speed trap.

When Gehlke noticed the speed trap, he decided to make a sign on the back of a plastic lid that read, "Cops Ahead! Stop at sign and light!" Five minutes later, he was the one being stopped by police.

"I'm Officer Elliott. I'm with the Seattle Police Department, and I'm letting you know that's against the law," an officer is heard telling Gehlke in a video later posted to YouTube.

"What specifically am I breaking, Officer Elliott?" Gehlke asks.

The officer then wrote Gehlke a $138 ticket for holding the sign in public. Seattle police later explained the law prohibits any signs that contain words like 'danger,' 'stop,' 'slow,'" and more.

But Gehlke thinks the problem isn't with the words on his sign. He thinks he was targeted for alerting the public about the speed trap.

"I do think this is police overstepping their bounds and using, twisting laws," he told KOMO-TV. "(The code) doesn't read like it's meant for stop signs like this. It's clearly meant for people trying to put up 'no parking' signs or stop sign or a yield signs on a public right-of-way. Not someone who made a sign on a Rubbermaid."

Gehlke says he wonders if protestors holding signs reading "stop police brutality" in a city intersection would also be cited for the same infraction, or suburban families who post notices reading "slow, children at play."

He tells KOMO-TV he plans to appeal the fine.

"I wasn't trying to bother the cops," Gehlke said. "The idea was to get people to look and say, 'oh, there are cops. Maybe I should slow down.'"