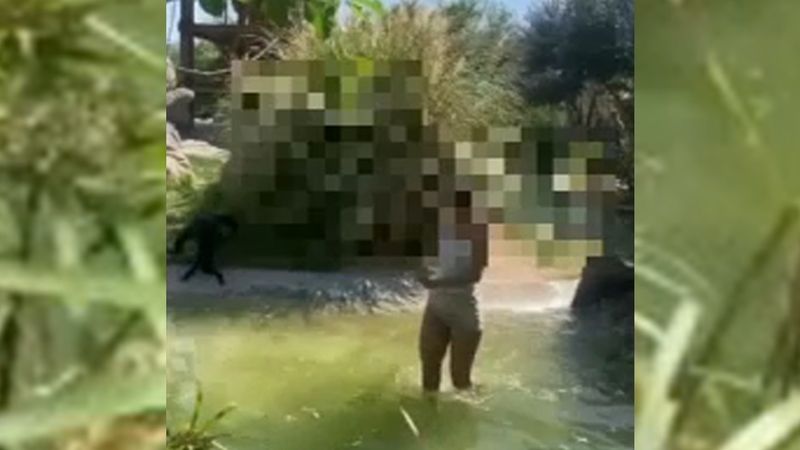 EL PASO, TX -- A woman seen on video inside a spider monkey enclosure at the El Paso Zoo has since been fired from her job, ABC's El Paso affiliate KVIA reports.

The video was recorded May 22. It shows a woman walking through knee-deep water and reportedly trying to feed the monkeys junk food.

The zoo's director described what the woman did as "stupid." A spokesman for the El Paso Police Department said what she did was "absolutely moronic and illegal behavior."

The boy's mother and the gorilla shared a mom to mom moment at the Boston Zoo.

"These are primates we're talking about, they could do some substantial damage to you," zookeeper Mason Kleist said. "They may be small monkeys but they can take you to the ground if they wanted to."

In addition to putting herself in danger, the zoo said the woman put the monkeys in danger too. They are fed a specialized diet, so giving them a foreign food could have caused significant stomach problems.

The trespassing may also have ruined years of delicate training.

Stanley, L.A.'s most famous giraffe, is at the center of two misdemeanor criminal trials and has been "seized in place" as evidence by the state. Meanwhile, dozens of people are fighting to get refunds from Malibu Wine Safaris.

"It takes years to build trust with these animals and for someone to come in there for five minutes for a video on Instagram or whatever just ruins years of work," Kleist said. "It's going to take a long time to get them back to where they were and training."

Zoo officials said they plan to press charges against the woman. They also will look into installing cameras and modifying the fencing to ensure this never happens again.

As for the woman, she's already lost her job over this.