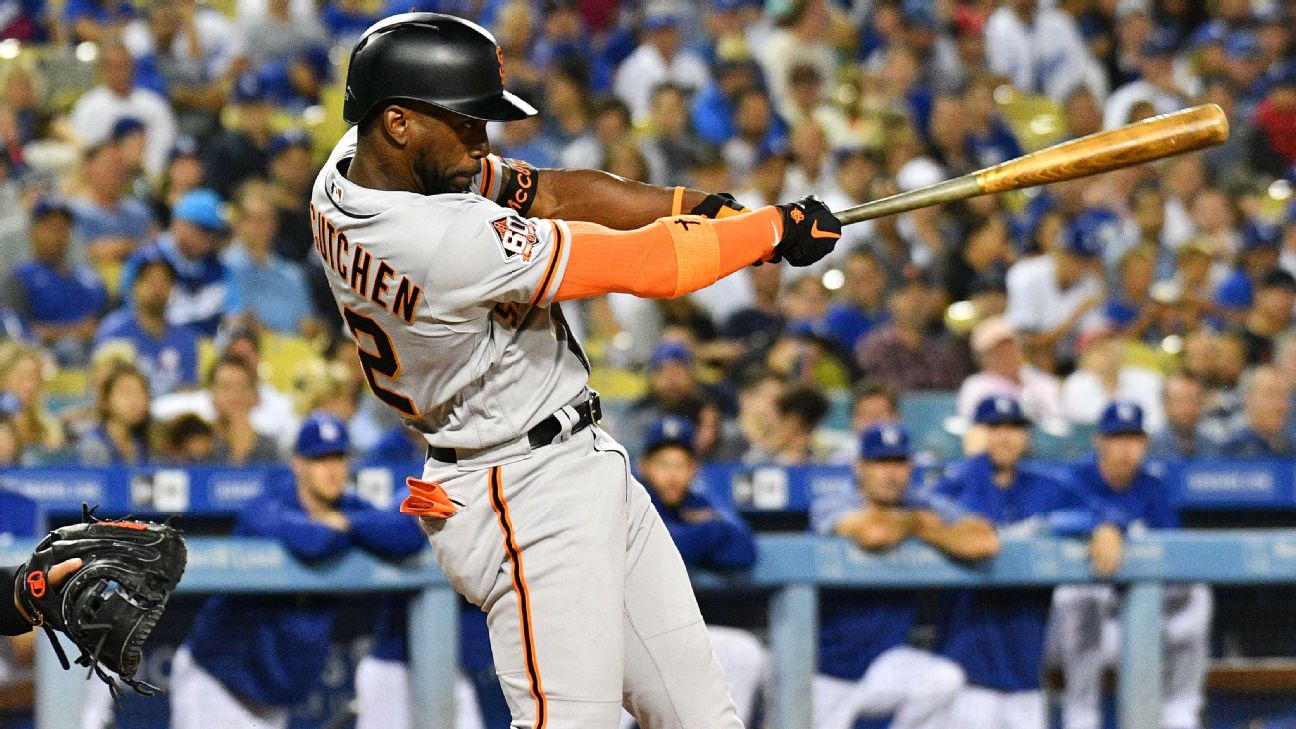 But what took so long?

With slugging superstar Aaron Judge still ailing and languishing on the disabled list because of a broken bone in his wrist, the New York Yankees made a move late Thursday night that should have come weeks ago.

Welcome to the Bronx, Andrew McCutchen. Now come get the pinstripes you ought to have been wearing since the last day of July.

As Judge continues to recover from a chip fracture in his right wrist, the Yankees have agreed to a trade with the San Francisco Giants for McCutchen, a source told ESPN's Buster Olney. McCutchen, a 31-year-old, five-time All-Star outfielder, will bolster the Yankees' offense and defense until their big power-hitting, hard-throwing, 26-year-old right fielder can come back.

And when that will be remains anybody's guess.

Consider the following five words from manager Aaron Boone's pregame news conference Thursday afternoon, several hours before the deal for McCutchen was made:

That was part of Boone's update on Judge, who continues to deal with the wrist injury that sidelined him exactly five weeks ago when he was hit on the right ulnar styloid bone by a 94 mph pitch.

Initially, the Yankees had predicted a three-week recovery period.

They have since blown past that, with no clear indication as to when Judge will be able to return.

"[Thursday] was a good day," Boone said. "Another positive step for him."

Sure, Judge was able to run the bases, do some conditioning work, read fly balls and ground balls in right field, throw a little -- albeit not yet at full intensity -- and undergo some rehab exercises. But he still has yet to swing a bat. The bone is still broken, and it's causing pain at the point of full range of motion.

Boone remains optimistic that once the pain completely disappears and Judge resumes swinging, he will be back in the mix very quickly.

But when will that be?

That question helps answer why the Yankees apparently felt they had to make this move. The tedious nature of Judge's healing process has led them to a tipping point of sorts as they try to stay within reach of the Boston Red Sox in the American League East while holding on to a wild-card spot.

In getting McCutchen in time to make him eligible for their postseason roster, the Yankees bring into the fold a player who has spent all of this season playing right field. Although he had spent nearly all of his previous 10 seasons playing center field, McCutchen has played all but one of his 128 games for the Giants in right.

The lone game he didn't play in right? He served as San Francisco's designated hitter in an interleague game.

Since Judge's injury, New York's primary DH, Giancarlo Stanton, has been forced into playing the field more regularly than the Yankees would like. Their version of the "Iron Man," Stanton has missed only one game this season, way back in May.

He has played in 83 straight games, with many of the recent ones coming as he has fought through some mild hamstring tightness.

"There is a day off in his future," Boone said early Thursday. "With us being as beat up as we are, it's a little tough to get your horses days right now. We've certainly leaned on him heavily. It's something that we constantly just try to do what's best for the club and the individual."

Stanton had trudged through a 10-game homerless stretch before blasting his 300th career dinger in Thursday's 8-7 loss to Detroit. Earlier in the week, he said he had no problems with all the extended action he has been receiving.

"We're beat up right now, so I need to be a staple in there to help try to push us through this hard time," said Stanton, also addressing injuries to Gary Sanchez, Didi Gregorius and Aroldis Chapman. "If I'm able to be out there, I want to be out there.

"We need a push, but not always from me every night. But if I'm out there, I feel like I've got a chance to help us."

Enter McCutchen, a reported Yankees target before the non-waiver trade deadline period ended in July, to provide the push that will ultimately get Stanton more days as a DH, and perhaps an extra day or two of rest down the stretch.

Although Stanton has provided some pop on the days he has played in right, the Yankees' offensive numbers at the position have been dismal since Judge was hurt July 26.

Yankees right fielders ranked 10th in the league in batting average, fifth in on-base percentage and second in slugging percentage before losing Judge, who is batting .285 with 26 home runs and 61 RBIs.

In the five weeks since, Yankees right fielders rank 30th in batting average, 29th in on-base percentage and 29th in slugging.

New York hasn't gotten much production from left field recently either as Brett Gardner hasn't had a multihit game in nearly three weeks. In has past 11 games, Gardner has gone 8-for-39 (.205). McCutchen's arrival could help spell the 35-year-old left-handed-hitting veteran, particularly against lefty pitchers.

Even with McCutchen posting some of the worst offensive numbers of his career (.255 batting average, .772 OPS), his addition could provide a much-needed jolt -- a jolt the Yankees could have used a month ago.

But even if it does, it likely won't measure up to the jolt they really need. One from a healthy Judge.