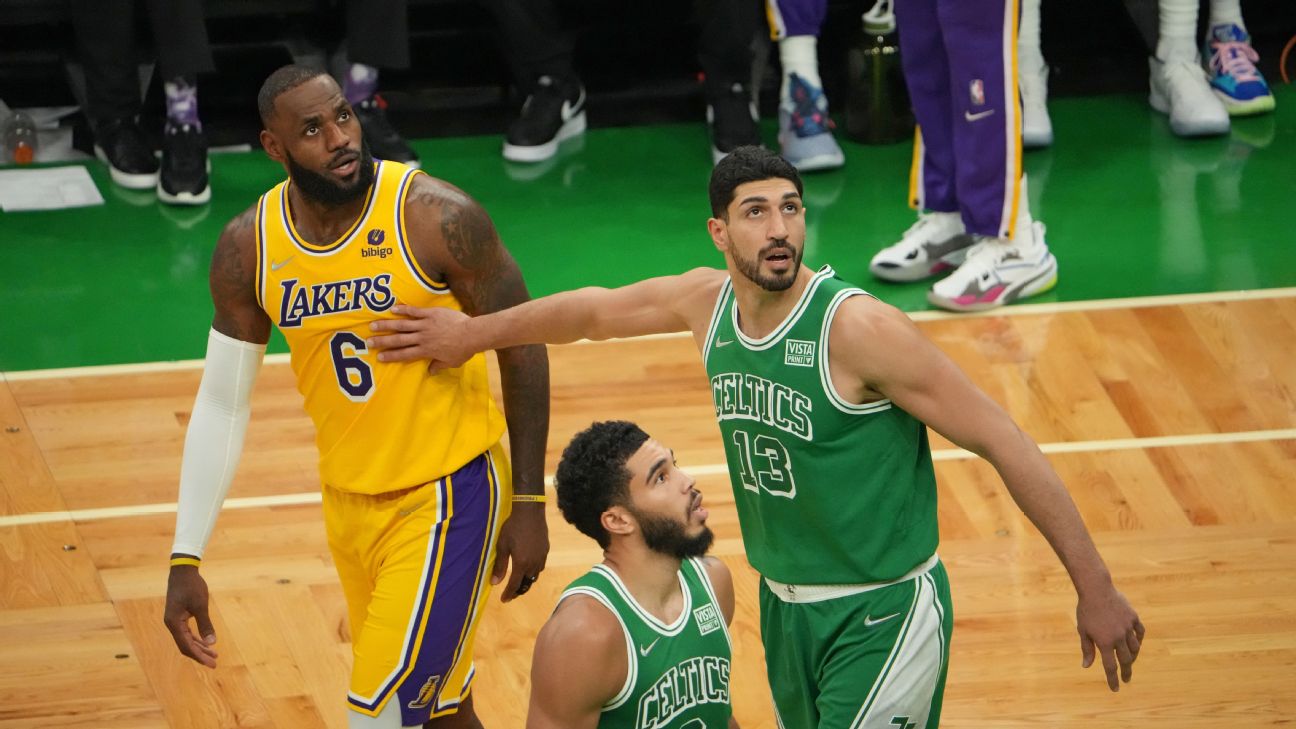 BOSTON --Boston Celticscenter Enes Kanter Freedom said he would welcome the opportunity to speak to Los Angeles Lakers star LeBron James-- whom he has criticized, along with Nike, of hypocrisy because of not speaking out about human rights violations in China -- and "educate" him on the subject.

"Sure, I'd love to sit down and talk to him," Freedom said Tuesday after the Celtics' practice. "I'm sure it's going to be a very uncomfortable conversation for him. I don't know if he's gonna want that. I'll make that really comfortable for him.

"I feel like it's definitely time for athletes to stand up for the things they believe in ... not just in America ... but all over the world."

Freedom, who became a U.S. citizen on Monday and changed his last name from Kanter to Freedomto celebrate the occasion, has repeatedly spoken out against both James and Nike for their failure, in his eyes, to call out human rights abuses against the Uyghur population in China's Xinjiang province. During his interview with reporters Tuesday, he wore a shirt that read "Freedom for Uyghur."

After the Celtics beat the Lakers at TD Garden earlier this month, James was asked about Freedom's comments about him. James said Freedom is "not someoneI will give my energy to," adding that Freedom had an opportunity to approach him after the game but instead walked by him in the hallway.

When asked about that interaction Tuesday, Freedom -- whose Celtics play the Lakers on Dec. 7 in Los Angeles -- presented his side of the story.

"I was actually on the court and after I left the court, he was behind me. ... Then I stopped to take a picture with a kid, and he was the one who walked right past me," Freedom said.

Freedom on Tuesday reiterated his feeling that Nike is "the biggesthypocrite company out there," noting, "They stand for Black Lives Matter in America -- amazing. They stand for the Latino community. No Asian hate. They stand with the LGBTQ community. But when it comes to some of the countries out there, like China, they remain silent. Obviously they are using these players to become the face, like Cristiano Ronaldo for soccer, LeBron for basketball, and some other athletes. But they're becoming puppets.

"I feel like we need to be careful of what we are wearing, because every time you put those items on your feet or back, there's so much blood or sweat or oppression on those items."


Freedom also renewed his criticism of Michael Jordan for remaining silent on these issues and said other players have encouraged him to bring Jordan into the conversation as well.

"The thing is, whenever I talk about LeBron, whenever I talk about Michael Jordan, the Black athletes in the league are the ones reaching out to me and saying, 'Listen, talk about this person,'" Freedom said. "Not many people know this, but they are the ones giving me talking points. When Black Lives Matter protests happened, I was the third one in the whole league that went out there and protested. I was actually wearing my jersey. I wanted them to know that I am with them.

"But when these issues are happening, some of the other players out there in the league are scared to say anything against LeBron or Jordan ... but they are reaching out to me and giving me talking points and say, 'Listen, you talk about LeBron. It's amazing -- but he's at least standing up for things in America. Why don't you say anything about Michael Jordan? The only thing he is doing is just giving money, but he is remaining silent. He's scared to speak up.'"

This season Freedom has been wearing shoes depicting various people and places he has spoken out against, including Chinese Communist Party general secretary Xi Jinping, Nike and James. He has also used his shoes to promote causes like freedom for Tibet and Taiwan.

He said the idea for the shoe campaign was his own, and that it came from his childhood growing up in Turkey. When he would watch NBA games on television, the first thing he'd notice was which shoes the star players were wearing, and he decided that would be a way to raise awareness and break through to young people watching at home.

"The important thing is to ... inspire the young generation," Freedom said. "And I think that was the best way to do it. And I looked at the rulebooks, and there was nothing against it."

To that end, Freedom said he had a conversation with Adam Silver about his shoes and told the NBA commissioner he would comply with any league rules.


"I was like, 'If there's any rules that I'm breaking or I'm violating, let me know. I'll be the first one to follow,'" Freedom said. "And he said, 'No, you're not violating any rules.' And I was like, 'Adam, you guys are the ones that are telling us and encouraging players to stand up for what's right, not just the problems in America, but all over the world. So you guys are the ones that encouraged me to talk about all the violations that are happening all over the world, right?' And he was like, 'Listen, you have the freedom to say whatever you want.' And I was like, 'I appreciate that.'"

Freedom was speaking to the media for the first time in several weeks. Through the first 13 games of the season, he played less than 10 minutes combined in two brief appearances as he sat third in Boston's center rotation behindRobert Williamsand Al Horford. On Nov. 14, he posted to Instagram a flip book with the caption "Keep limiting me on the court, I will expose you off the court." The next day, he entered the game in the second half after Williams exited with knee soreness, and has played in every game since -- though only one of them, last week against Houston, came with all three of them healthy.

In the wake of his social media post, Freedom said he spoke to Celtics coach Ime Udoka about his playing time, and Udoka assured him it had nothing to do with his political beliefs.

Freedom also spoke Tuesday about his appearance onTucker Carlson's show Monday night, during which Freedom said Americans "should keep their mouth shut and stop criticizing the greatest nation in the world and they should focus on, you know, their freedoms and their human rights and their democracy."

When asked about those comments Tuesday, Freedom said he is an apolitical person and is instead focused on human rights.

"There is a thin but huge line between human rights and politics," he said. "The reason I'm so involved with the politicians, the senators or congressmen, people in State Department, White House or whatever -- the reason is because I'm trying to help people. We are trying to create bills, we are trying to find ways to just help those people -- not just in Turkey, but all over the world -- trying to find a way to put some sanctions on some of the countries for violating some human rights, try to boycott the Olympics, trying to free other political prisoners.

"Obviously, we are having our problems here, but people for sure should definitely feel blessed to be in this situation." 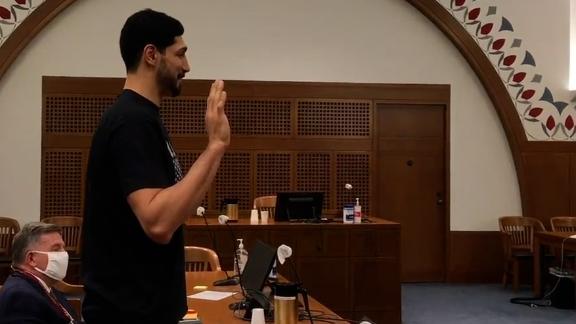