LOS ANGELES -- When Hyun-Jin Ryu started Game 1 of last year's National League Division Series for the Dodgers, it was explained as a strategic decision meant to juggle rest, a circumstance that did not impact Clayton Kershaw's ability to pitch a potential decisive Game 5. When he was named the Opening Day starter five months later, it was a byproduct of others -- namely Kershaw and Walker Buehler -- not being ready enough or healthy enough to begin the season.

Now Ryu will start the All-Star Game, picked ahead of every other pitcher in his league, and there is no need to justify it. Dave Roberts, the Los Angeles Dodgers manager who will lead the National League All-Stars into Tuesday's Midsummer Classic, called it "a no-brainer."

"He's been the epitome of consistency," Roberts said during Monday's news conference from Cleveland. "He's been the best pitcher in the National League."

Ryu leads the majors in ERA (1.73) and strikeout-to-walk ratio (9.90) while trailing only Justin Verlander, the American League's starting pitcher, in WHIP (0.91). He has issued only 10 walks in 109 innings and allowed only 100 baserunners throughout the first half, the latter setting a record among those with at least 17 starts and 100 innings before the All-Star break.

"I always thought that I could compete in this league," Ryu said through a translator last week, "but I didn't know I was going to perform this well."

Ryu was a prized acquisition out of the Far East, the first player to go straight from South Korea to the major leagues. Seven years ago, the Dodgers spent nearly $62 million to earn exclusive negotiating rights and then sign him to a contract. But Ryu will tell you he never pitched this well in the Korean Baseball Organization, an inferior league altogether. He was solid in his first two seasons as a Dodger, going a combined 28-15 with a 3.17 ERA in 344 innings from 2013 to 2014.

Ryu's ascension to stardom -- at 32, an unlikely age in a sport that continually skews younger -- is no coincidence. It's the result of marked evolution, both in his mindset and in his repertoire. It was sparked by maturity, by desire, by failure. It consisted of three critical steps.

Ryu underwent surgery to repair a torn labrum in his left shoulder in May 2015 and did not pitch at all that season. He returned in July of 2016, pitched once, then was shut down for the rest of the year with pain in his elbow, ultimately undergoing a debridement procedure to clean up damaged tissue. In two years, Ryu made one start.

"The entire process," he said, "was basically the lowest point in my life."

Tommy John surgery -- a procedure Ryu had as a teenager -- boasts a relatively successful track record, but labrum surgery does not. The shoulder isn't anywhere near as straightforward. It will develop abnormalities over time, some of which are necessary to pitch effectively, and repairing them could prove counterproductive.

Clemens, Bret Saberhagen and Orel Hershiser bounced back well from shoulder surgery, but a host of others -- Johan Santana, Mark Mulder and Mark Prior, to name a few -- never fully recovered.

"Coming back from shoulder surgery was definitely more than I expected or anticipated," Ryu said. "People were doubting me, and there were many people that were saying it's one of the toughest injuries to come back from. But I tried to focus on my goal, coming back and pitching on the mound again, and really try to cancel all those doubts. That definitely helped me come back from it. But to be completely honest, it wasn't easy at all."

What we're seeing now, many will say, is a result of Ryu being fully healthy for the first time in a long time. He said the Dodgers "knew when they signed me I wasn't 100 percent in terms of my body condition and health-wise," alluding to the shoulder soreness that occasionally crept in early on. Getting that corrected, and pitching pain-free for perhaps the first time since coming to the United States, might be the biggest reason Ryu has emerged as a dominant figure.

But it isn't the only one.

A pattern began to develop early in Ryu's career. He was elite at throwing fastballs and changeups thrown arm-side, so right-handed hitters began selling out on those outside-corner pitches in hopes of doing damage. He needed a pitch firm enough to run in on right-handed hitters and keep them honest.

Ryu's slider was inconsistent, so longtime Dodgers pitching coach Rick Honeycutt suggested he try a cutter. The mechanics were basically the same; all he had to do was alter the grip. The time spent recovering from surgery presented an opportunity for both of them to explore this further, studying the way CC Sabathia used his cutter to both sides of the plate. Ryu grasped it instantly. Over time, he learned how to manipulate the pitch to give it more depth when necessary.

"You ask him to do something, he can do it," Honeycutt said. "He can do whatever he wants with the ball."

When Ryu returned in 2017, he was suddenly a five-pitch pitcher. He had his three staples -- the four-seam fastball, the changeup and the curveball. But he also had the cutter, a pitch he has thrown 20 percent of the time over the past three years. And he also developed a two-seam fastball, a product of studying the way Dallas Keuchel uses the pitch to bust left-handed hitters inside.

Ryu can throw all of them, in any count, to all four quadrants of the strike zone -- a devastating arsenal, even though the vast majority of them travel less than 90 mph.

In the words of teammate Ross Stripling: "Hyun-Jin doesn't have a fastball count."

Ryu tore his groin muscle off the bone during a start in Phoenix last May. He carried a 2.12 ERA to that point, but would be sidelined for 15 weeks, yet another setback in a mounting list of them.

Honeycutt took it as an opportunity for Ryu to evolve further.

Ryu was probably the best on the staff at reading hitters' swings, a skill that enabled him to quickly assess how they reacted to certain pitches. He also had a photographic memory for sequences, which allowed him to constantly change his patterns. And so Ryu usually just relied on feel when he pitched, never necessarily scouting his opponents ahead of time.

"Just like in anything that you study, it's way better to learn actively rather than passively," Ryu said. "My first couple years, I was more of a passive learner, just trying to learn about the hitters from others. But the last two years, I've been more active studying these hitters, and I think that resulted in better pitch sequence and just attacking the hitters in general and getting to know them. That really helped my game incredibly."

Honeycutt began by giving Ryu his notes to work off while watching other pitchers' starts. He wanted him to build a foundation of knowledge before meeting with his catcher. He wanted him to take ownership of his starts.

Of utmost importance was having an idea for how to exploit tendencies to begin and finish at-bats, to formulate a plan for how to attack certain hitters when working ahead and behind counts. The next layer was learning how opponents changed their tendencies when given opportunities to drive in runs. Ryu is excelling in that situation. He sports a 3.38 ERA with runners in scoring position this season, easily the lowest mark in the major leagues. Second-best is Max Scherzer -- with a 6.44 ERA.

Since coming back from that groin injury on Aug. 15, 2018, Ryu has allowed 32 earned runs in 161 regular-season innings.

"You're seeing him very motivated," Honeycutt said. "He worked hard to get himself back, and now he's very in tune with what he wants to do in the game." 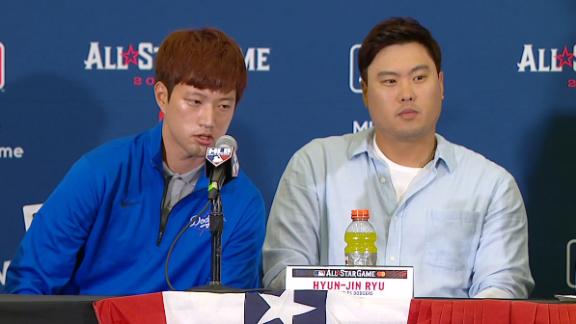