Jonas Valanciunas goes 7-for-7 from 3 in first half, scores career-high 39 as Pelicans beat Clipp... 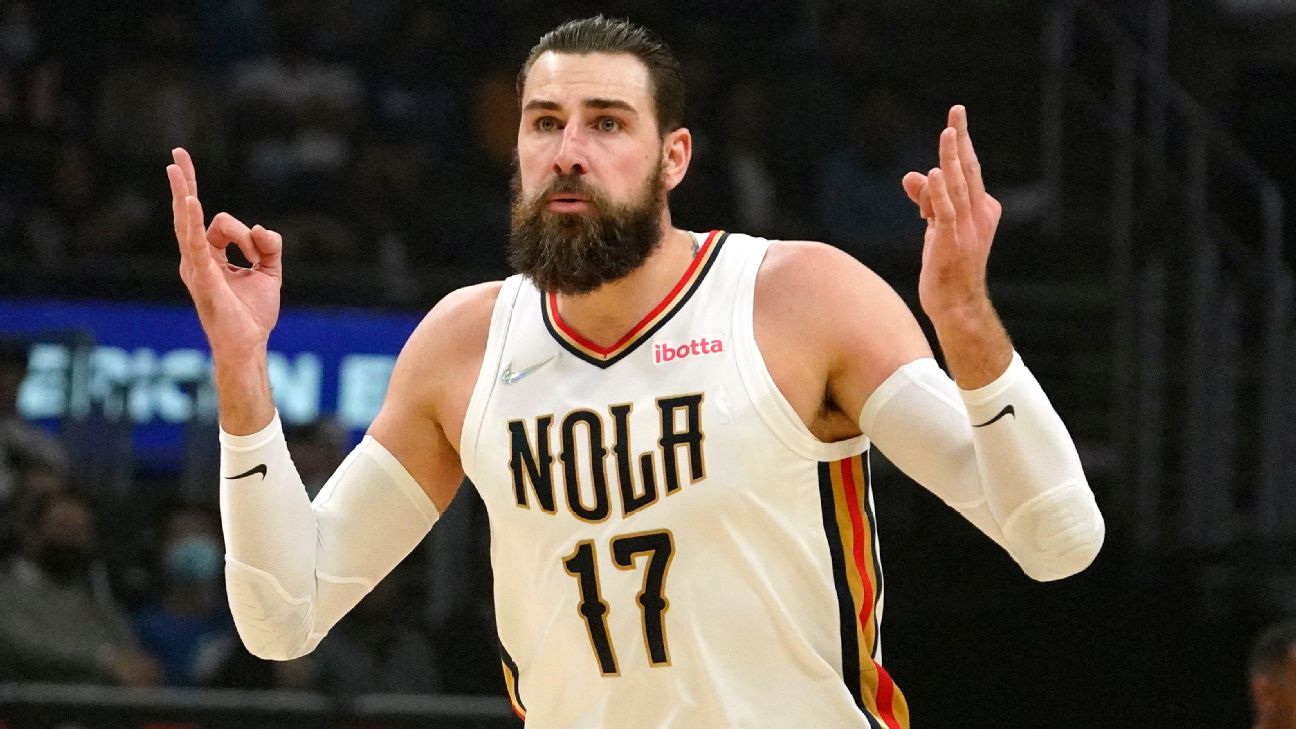 Jonas Valanciunas wasn't exactly a marksman when he entered the NBA in 2012. In fact, in his first five seasons in the league, he went 1-of-4 from 3-point range.

But those days are long gone.


Valanciunas hit his first seven 3-pointers on Monday night -- all in the first half -- as he helped lead the New Orleans Pelicans to a 123-104 win over theLA Clippers.

The 6-foot-11, 265-pound bruiser has slowly started to add the three-point shot to his game since 2017, but he's never had a night like Tuesday when he scored a career-high 39 points to go along with 15 rebounds.

"Guys were calling him Dirk Valanciunas," Pelicans coach Willie Green said, referencing Dallas Mavericks great Dirk Nowitzki. "But we want him shooting the ball when he's open and mixing it in. He still wants to go to the post, which I love about him. He's a physical guy. But just explaining to him how it's going to open our offense up with his ability to shoot the ball the way he can, it was amazing to see tonight."

Valanciunas joined Stephen Curry as the only players this season to record at least 35 points, 10 rebounds and 7 3-pointers in a game -- and both did it against the Clippers. Valanciunas also became the first player in NBA history to have seven 3-pointers and seven offensive rebounds in the same game.


In his first 18 games, Valanciunas was shooting 56.4% from deep. But he went 1-for-11 in his three games prior to Tuesday and it appeared that his percentages were coming back down to Earth.

But when the first two shots went in, Valanciunas kept letting them fly. He went on a personal 14-4 run in the second quarter, including a stretch during which he made back-to-back-to-back 3-pointers that sent the Pelicans bench into a frenzy.

By the time the night was finished, Valanciunas had improved to 30-for-58 on 3-pointers this season -- a league-leading 51.7%. He's two away from tying his career high for 3 in a season, which he set two seasons ago in Memphis.

But he knows he has a long way to go before he can live up to his new nickname.

"Well, I'm still Jonas Valanciunas," the 10-year veteran said with a chuckle. "Everybody wants to be [Dirk]. He's one of the greatest big guys in the game. But I still gotta work a lot to be like him.

Valanciunas' career-high 7 3s comes just 10 days after he set his previous career high when he went 5-of-9 on Nov. 19 against the same Clippers team, although that game was played in New Orleans.

"We just couldn't stop him," Clippers coach Ty Lue said Monday night. "We were due for a bad defensive game, but Valanciunas made 7 3s."