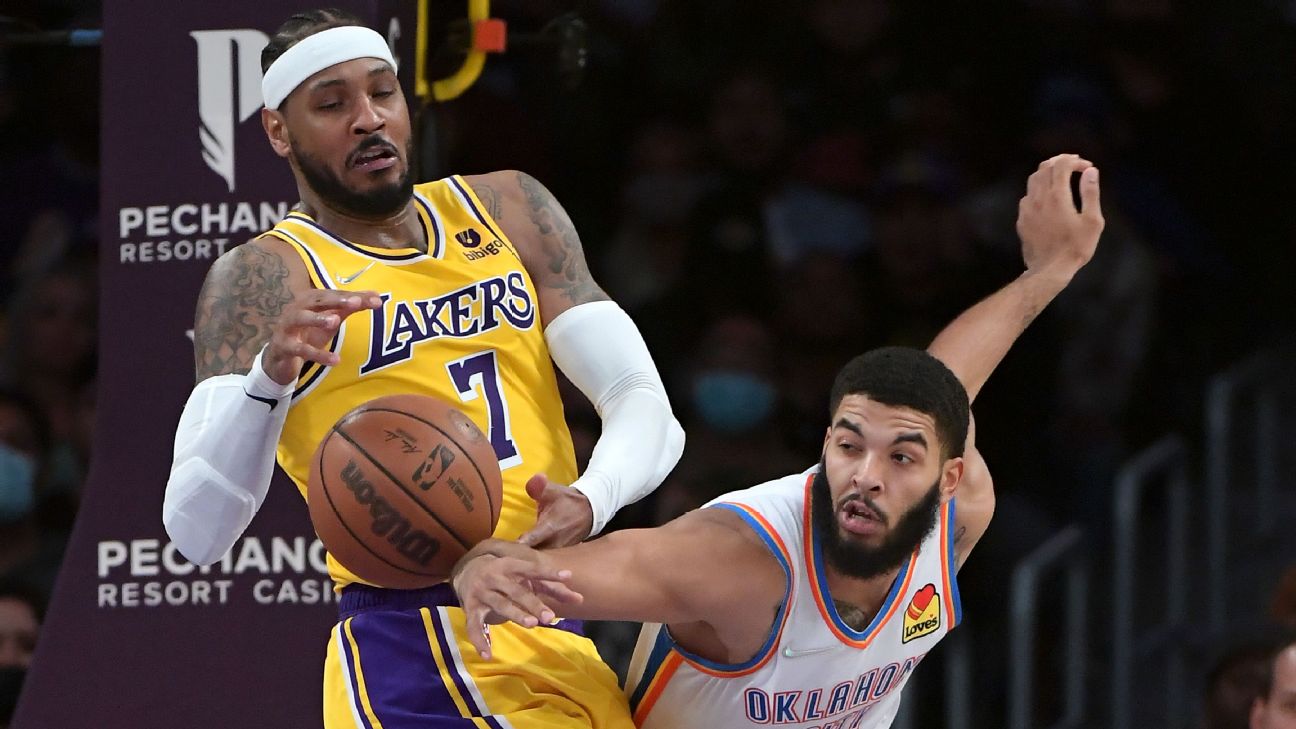 LOS ANGELES -- If the Lakers had managed to protect two massive leads against the Oklahoma City Thunder -- up 26 on the road last week and up 19 at Staples Center on Thursday night -- they would be sitting pretty with a 7-2 record and OKC would be winless at 0-8.

Alas, that isn't the case. The Thunder outscored the Lakers 35-24 in the fourth quarter and won 107-104 Thursday for their second come-from-behind win against L.A., leaving the new-look Lakers, once again, scratching their collective heads about what happened.


"Defensively we were all over the place," said Anthony Davis, whose 29 points, 18 rebounds and 5 assists weren't enough to lift L.A. to the win. "I feel like they were waiting on our coverages and were just picking us apart. ... For some reason this team comes in every time they make shots against us, they made 15 3s again tonight."

The Thunder went 15-for-41 from 3, this after going 15-for-37 from 3 in their win last Wednesday. The Lakers' defense, ranked in the top three each of the past two seasons under coach Frank Vogel, continues to lag. After the Thunder loss, L.A. is allowing 107.2 points per 100 possessions, putting the Lakers in the bottom half of the league (17th).

Davis, when asked about the defensive miscues, made it clear that the Lakers were executing the schemes that were asked of them, but the Thunder were prepared to break them down.

"I mean they knew what we were doing, kind of did that entire second half and their coach or Shai [Gilgeous-Alexander], whoever it was that made the adjustment to put their players in the right spot," Davis said. "And they made shots."

In the last couple of minutes, the game came down to the shot that Gilgeous-Alexander hit -- a 34-footer from the logo with 16 seconds left on the shot clock and 1:18 left in the game clock to put the Thunder up by six -- and the shot that Russell Westbrook missed.

After Carmelo Anthony hit two late 3s to make it a one-possession game, Westbrook pushed the ball up the court and missed a 3 from the wing with 3.5 seconds remaining, rather than working to find the hot hand.

While the Lakers have had more than their fair share of injuries bogging down their fresh beginning -- LeBron James missed his third game of the season already, this time with an abdominal strain that is expected to keep him out at least another week, and Davis suffered a sprained right thumb in the first half but played through it -- there's something else working against them.

Teams, no matter their record, seem to bring the competition to L.A., with a rigor that the Lakers seem ill-equipped to meet at the moment.

"It's something that we discuss. We talk about it all the time. Just understanding and owning the fact that guys will play, teams will play differently when they play against us," said Anthony, who scored 21 and saw L.A. lose for the first time in four games that he has scored 20-plus. "So that's [not] the elephant in the room. That's not something that we don't speak about. We know that, we talk about it, we discuss it.

"I mean, you look at like tonight for an example, [Darius] Bazley, right? I don't want to say his stats, but we go over that stuff, we scout that. But he comes against us and he makes most of his 3s against us. So, it's going to happen. We just got to own that. We got to accept that and just make sure we cut people's water off when that time comes."


Bazley was 8-for-37 from deep coming into Thursday and went 2-for-3 against the Lakers.

From targets on their backs, to finger pointing, to a broken thumb for Talen Horton-Tucker and now sprained thumb for Davis, and a handful of other injuries to expected rotation players, the issues are mounting for a Lakers team clear in its intention to win a championship this season.

It's been an uneven start at best. But there's plenty of basketball to go before the finish line.

"It's interesting," Westbrook said when asked about the injury woes. "But you know ... I'm a person that you play the cards you're dealt. Whatever it is, whatever that's available, that's what we work with. We haven't had our full team one time -- not even close actually.

"So, we just got to take whatever it is that we have and make the best out of it and compete to the best of our abilities." 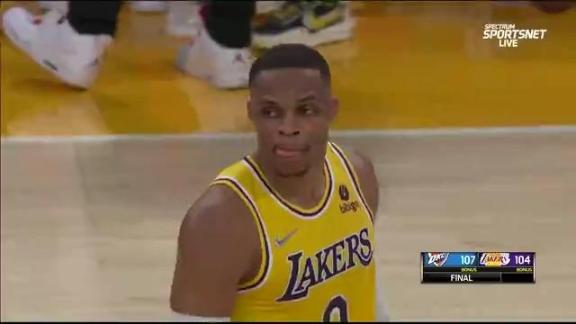