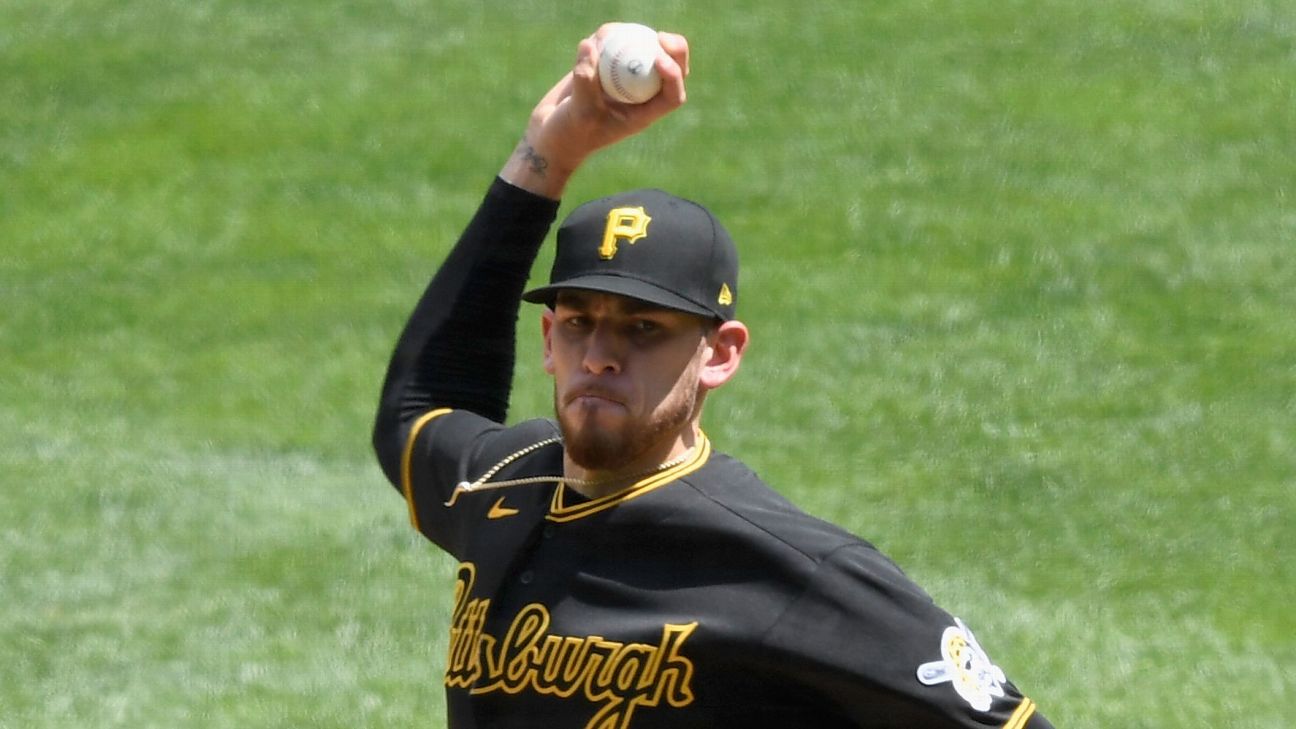 The San Diego Padres have acquired right-hander Joe Musgrove from the Pittsburgh Piratesas part of a three-team deal, it was made official Tuesday.

The Padres will be sending a large package of prospects, including well-regarded center fielder Hudson Head, to the Pirates. Pittsburgh also will receive right-handers David Bednar, Drake Fellows and left-hander Omar Cruz from San Diego.


The trade also involves the New York Mets, who will receive left-hander Joey Lucchesi from the Padres. Meanwhile, Mets prospect catcher Endy Rodriguez is headed to the Pirates.

Musgrove will be the third starting pitcher acquired via trade by the Padres this offseason. San Diego picked up left-hander Blake Snell and right-hander Yu Darvish in separate blockbuster trades last month with the Tampa Bay Rays and Chicago Cubs, respectively.

Musgrove, 28, was 1-5 with a 3.86 ERA in eight starts for the Pirates in the coronavirus pandemic-shortened 2020 season.

Musgrove, Pittsburgh's Opening Day starter in 2020, is set to make $4.45 million in 2021, after he and the Pirates agreed to a contract on Friday to avoid arbitration. He can become a free agent after the 2022 season.

He is 29-38 with a 4.33 ERA over 108 appearances in five major league seasons, including 83 starts. He won a World Series ring with the Houston Astros in 2017, before being sent to the Pirates in the trade that broughtGerrit Cole to the Astros in January 2018. Musgrove was the winning pitcher in Game 5 of that World Series against the Los Angeles Dodgers.


The trade also will be a homecoming for Musgrove; he played at Grossmont High School in suburban El Cajon, California.

Musgrove will head from a Pirates team that had the worst record in the majors during the 2020 season to a Padres club that ended a 13-year playoff drought and believes it can contend for the World Series title.

Anchored by a star-studded infield with Fernando Tatis Jr. at shortstop and Manny Machado at third base, San Diego won a wild-card series against the St. Louis Cardinalslast season,before being swept out of the National League Division Series by the rival Dodgers, who went on to win the World Series.

The Padres needed to beef up their rotation after running out of starters in the playoffs and then losing Mike Clevinger to Tommy John surgery. Clevinger and Dinelson Lamet both came out of their final regular-season starts with elbow injuries. Clevinger returned for the NLDS opener, but his injury forced him out in the second inning of a 5-1 loss. Lamet missed the playoffs entirely, but he has avoided surgery.

The additions of Darvish, Snell, Musgrove and South Korean sluggerHa-seong Kim to a core of players led by Tatis and Machado are expected to make the Padres one of the best teams in the majors -- perhaps good enough to end the Dodgers' eight-year reign as NL West champions.


The Pirates hoped Musgrove would be part of a starting rotation that would carry the club after the departure of Cole and 2013 NL Most Valuable Player Andrew McCutchen. Musgrove went 6-9 with a 4.06 ERA in 2018 and 11-12 with a 4.44 ERA in 2019, one of the few constants on a team that plummeted during the second half that season, leading to a massive leadership overhaul.

With Pittsburgh general manager Ben Cherington in the midst of a full reset focused on replenishing the team's talent pool -- he traded star first baseman Josh Bell to the Washington Nationals on Christmas Eve -- Musgrove was one of the few major league trade options available.

Lucchesi is likely to compete for a spot at the back of New York's rotation, behind two-time NL Cy Young Award winner Jacob deGrom, Carlos Carrasco, Marcus Stroman and David Peterson. The Mets also expect to have Noah Syndergaard back from Tommy John surgery sometime after May.