Wade after game winner: 'It's special for me' 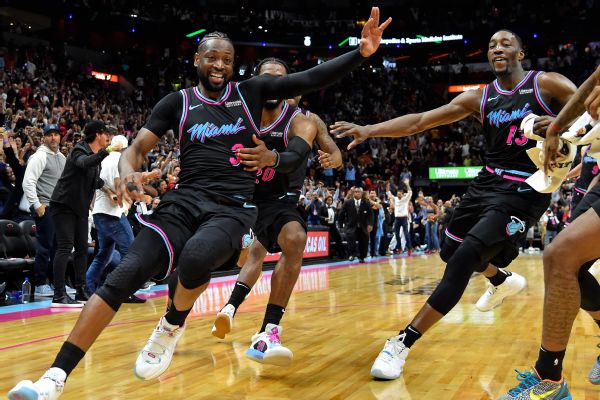 MIAMI -- In a season full of memories and a career full of Hall of Fame highlights, Dwyane Wade created the most memorable moment of his final NBA season Wednesday night by banking in a one-footed 3-pointer at the buzzer to lift the Heat to a 126-125 win over the Golden State Warriors.

"It's special for me," Wade said after the game. "Obviously as a team we needed this win bad, but we kept fighting, everybody. I've been in this position so many times, and so many times you don't make the shot. And the one I make is a one-legged flick from my chest, it's crazy. But great to do it in front of the fans. This is a fun moment. I toldSteph [Curry]I needed this one on my way out. So y'all get enough, you got enough. I think the one thing cool for me is to be able to do this when you've got younger teammates that heard about some of the things you do but don't always get an opportunity to see it. So it was cool to be able to do it in front of those guys as well."

Wade's magical moment almost didn't happen as the final seconds ticked away. With the Warriors, once down as many as 24 in the first half, clinging to a two-point lead, Wade initially drove to the rim with nine seconds left in an attempt to tie the score but was denied by Warriors swingman Andre Iguodala.Wade passed the ball back to teammate Dion Waiters, who was double-teamed by the Warriors and threw it to Wade at the top of the key. With 1.4 seconds left, Wade attempted a 3-pointer that was tipped by Warriors forward Kevin Durant and blocked by Jordan Bell. Wade collected the ball and threw up a prayer that was answered.

The shot set off a wild celebration inside AmericanAirlines Arena as Wade was mobbed by teammates and then raced around the court to jump on the scorer's table.

"It was definitely one of my toughest game winners that I've hit," Wade said, after finishing with 25 points and seven rebounds. "I remember many years ago when Kobe [Bryant] hit that game winner on me in L.A. at the top of the key off the glass, and I couldn't understand how he could bank a 3 off the top of the key like that. Same thing. It doesn't make sense, but this definitely is special, especially in my last year, to be able to have special moments."

The shot left Heat players and fans in a delirious state of excitement while Warriors players were left shaking their heads. Curry, who exchanged jerseys with Wade after their final game against each other at Oracle Arena last month, just shook his head as a small smile crept across his face while officials reviewed the play to make sure Wade got the shot off in time.

"Just a lot of smiles," Curry said of his message to Wade after the game. "Frustrated smiles from our standpoint. But it was something special, him making a play like that, his last year in this building. I'd much rather see him jumping on the scorer's table when we're not on the court with him. But those are iconic moments that he's had. Deep down it was cool to see even though we lost. ... Moments like tonight kind of remind you of how great he is. It just sucks that it was against us."

Heat coach Erik Spoelstra wore a look of pride during his postgame news conference, acknowledging that he didn't wait long to give Wade a big hug after saying a few words to his team.

"I said I'm not waiting. I bear-hugged him," Spoelstra said. "But I think the raw, genuine emotion is my favorite one that I've seen in all of his ones that he's hit. And I have a couple of them in my office -- but this one, just the realization that it went in. And then I could see his look to see the official go like this [count it] and then he looked up at the score, and then there was the reaction.

"After being 16 years in the league -- just that raw joy. That's what it's all about. That was fun. That was one of my favorite moments, just watching him and his reaction and then the team's reaction after that."

Heat forward Justise Winslow said Wade celebrated "like a little kid" after the game was over.

"He was joking around, smiling, feeling hisself, but as he should," Winslow said. "He deserved to celebrate after that type of shot and that type of win. ... This was a very fun moment. This is a great moment for him and his career, and I'm just glad to be a little part of that."

Wade tied Bryant for five buzzer-beaters since 2003-04, according to ESPN Stats & Information. His shot also marked the first time the Warriors have lost on a buzzer-beater in Steve Kerr's tenure with the team. Wade was so busy celebrating that he didn't get a chance to trade jerseys with a Warriors player on the floor, as has been custom throughout his farewell tour.

"That's the biggest thing for me is to not be in this year and people saying, 'Yeah, I see why he's leaving,'" Wade said. "To be able to still have moments, to be able to still be a player that coach trusts to go to down the stretch of games and my teammates trust to find me, that means a lot to me because I still work very hard on my craft. So [this moment] will definitely go down in the books for me."

Wade has acknowledged all season how much it has meant to him to have players from all over the league reach out to tell him how much his game has meant to them over the years. After Wade's moment, Durant was left shaking his head at Wade's latest reminder of greatness.

"Man, I didn't even think about that until just now," Durant said of this probably being his final game against Wade. "He just gamed us, so I was thinking about the game. Such an amazing player and amazing person, somebody that I have been watching since middle school. To come up and have such an amazing career here in Miami, win championships. Just be a staple here in Miami, that's something you respect as a player. He's going out like this probably one of the best years I've seen from a guy that's retiring. So much love to D-Wade." 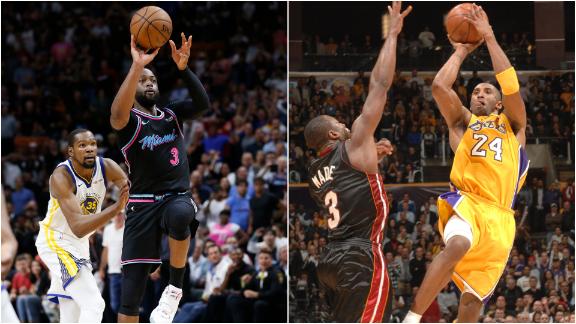