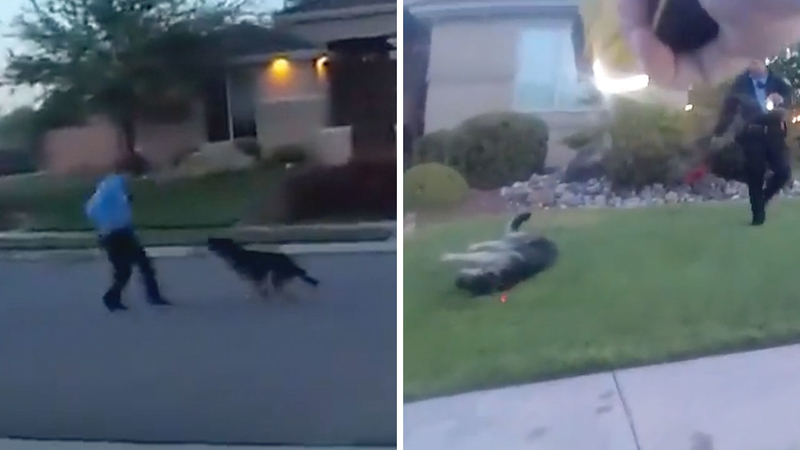 Officers use taser on dog while responding to domestic dispute

ST. GEORGE, Utah -- A Utah police department has released body camera footage showing an officer using a stun gun to subdue a dog while investigating reports of a domestic dispute.

On the evening of May 3, officers from the St. George Police Department were dispatched to a home after a 911 operator answered a call and heard arguing in the background before the female caller hung up. Minutes later, a local taxi service alerted police that they had been called to the same home to "pick up an intoxicated male who was 'beating up' the female," according to the police department.

The first officer to arrive at the home said he heard arguing through the closed front door. A woman within the home then opened the door to leave, and the officer said he saw a man within the home, identified by police as Willie Mosher, pull the woman back inside the home. The officer yelled at the man to let the woman go, and they both stepped outside as their dog barks at the responding officer.

"I want him out!" the woman, whose identity has not been released, can be heard saying on footage from the officer's body camera.

Mosher, who claimed that the female was "jacked up," then tries to call the dog over, though it does not come and begins to sniff around the yard. The officer asks Mosher to get the dog as a second officer pulls up to the home. Mosher ushers the dog closer to the front door, and the first officer tells him to "get the dog secured." The dog barks and then runs up to the second officer walking up to the home.

The second officer attempts to evade the dog's advances and orders Mosher to restrain the dog. The dog attempted to bite the officer during that interaction, according to a news release from the police department.

Over the next several minutes, the officers repeatedly tell Mosher to get the dog into the home. Later in the clip, Mosher and the female call for the dog, who then starts to walk toward the first police officer in the yard. The first officer fires his taser, hitting Champ, who howls in pain and then runs out of the frame and flees down the street.

"You're lucky your dog didn't get killed," the first officer told Mosher. "We gave you plenty of opportunities to get that dog down."

"I just about shot your damn dog," the second officer, who did not fire, added. "I came this close to freaking shooting it. You need to control that thing."

Mosher continues to ask the officers about the dog's whereabouts, but they press him for more information about the argument within the home for the remainder of the clip that was released.

Mosher was later booked into the Purgatory Correctional Facility, public records confirm, though it's not immediately clear what he was charged with. Champ was eventually captured by an animal control officer, according to local media reports.

In a subsequent administrative hearing with the city's legal department, the dog was deemed vicious and ordered to be euthanized. Ahead of the dog's scheduled euthanization, the city ordered a third-party review of the euthanization order.

"The City of St. George takes these incidents very seriously and will continue to do everything possible to ensure the safety of the public, our police officers and lives of the animals involved," the police department said in a Facebook post.

Mosher's father told ABC affiliate KTVX that the dog was targeted because Mosher was on probation at the time of the incident.

"[Champ has] been around little kids his whole life," Shane Mosher said. "[Champ] has never had an issue where he's endangered anybody, bitten anybody, never had a police report at all."