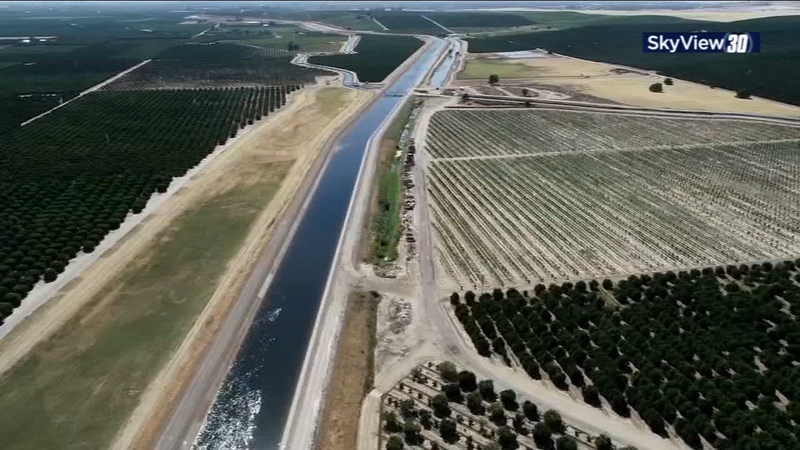 On Friday, the Friant Water authority, which operates the Friant Kern canal, explained the severe subsidence problem they're seeing in the South Valley.

It starts southwest of Porterville and continues for another 25 miles.

The canal has sunk twelve feet from its original height, including three feet from 2014 to 2017.

All of this affects the conveyance capacity of the canal, which means less water for irrigating hundreds of thousands of acres of farmland in Tulare and Kern Counties, and less potential for groundwater recharge.

"At this location, when it was originally designed, it had a capacity of about 4,000 cubic feet per second," said Friant Water Authority COO Doug DeFlitch. "What we're finding right now is that we can't deliver much more than 1,650 cubic feet per second. That's a reduction of about 60% of its design capacity."

"The fact that we're losing 60% means we're losing 60% to our communities, to our families, for our economy, and that's money that's just slipping away," said Assemblymember Devon Mathis (R-Visalia). "The money we're asking for in SB 559 is just a drop in the bucket in the state general fund."

"It is not only the responsible thing to do, it is the right thing to do for our economy, for our farmers, for our environment, for our families, and for our future," said State Senator Melissa Hurtado (D-Sanger).

SB 559, authored by Democrat Melissa Hurtado, seeks to solve subsidence's effect on the canal, by authorizing $400 million to fix it.

The bill is co-authored by two other Democrats, and two Republicans, including state senator Andreas Borgeas (R-Fresno).

"We have to fight to make certain that Sacramento and other parts of California understand that we can't take our way of life for granted," Borgeas said. "We cannot take our agricultural production for granted-that it's premised on water availability, deliverables, clean drinking water for our communities."

The Friant Water Authority has already started short-term fixes to the 25-mile stretch, which includes a new liner extension.

But money from SB 559 would fund the long-term fix.

One option is to raise the canal berm.

"What that would cause is about 30 bridges and a lot of property that is adjacent to the canal to be impacted and that has to factor into our decision," said Friant Water Authority CEO Jason Phillips. "But another option is to actually take and have a new canal that will be parallel to this that could avoid the impacts of all the existing bridges."