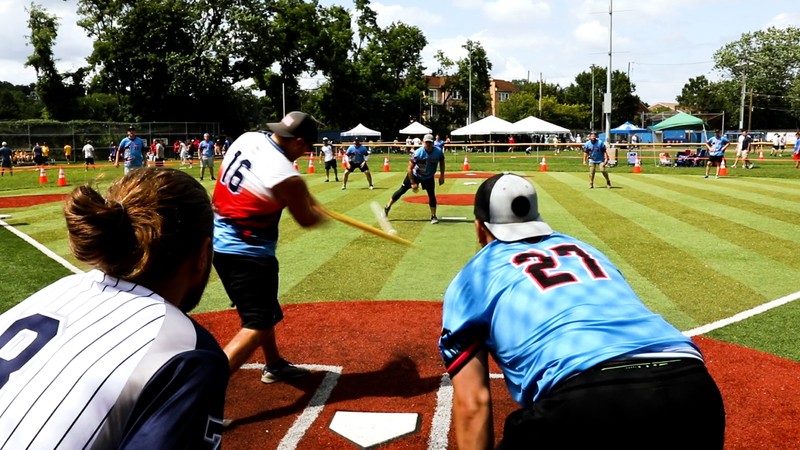 STATEN ISLAND -- Siblings Eric, Tim, Samantha and Matt Long have been playing the Long game for a long time. The Long game is Wiffle Ball, a staple of their suburban Staten Island childhood and a passion of their late father, Tommy Long.

In the past few years, the Long siblings have transformed their father's favorite pastime into a breathtaking spectacle that unites a community and raises thousands annually for a worthy cause.

"He would have no words," said Samantha Long.

"He would be amazed, at how big it got," said Matt Long.

"He would be blown away," said Tim Long.

"He'd love to be playing in this right now," said Eric Long.

The Tommy Long Wiffle Ball tournament, now in its fourth year, began in 2017 -- last year was canceled due to COVID-19.

It's held every summer at the Staten Island Little League complex and draws hundreds of spectators from across the city for a day of warm sunshine, cold beer, and friendly competition.

Additional money is raised through a homerun derby, food sales, donations and a 50/50 raffle. All proceeds benefit the Travis Roy Foundation, which invests in spinal cord injury research and provides quality-of-life amenities to comfort those living with paralysis.

"Travis, hockey player, very good at hockey actually, and his first 11 seconds on the ice, he was hit from behind and paralyzed," said Eric. "Every year, the Travis Roy Foundation hosts a Wiffle Ball tournament in Vermont."

The Vermont tournament is the stuff of legend. Dozens of teams from across the country compete on three replica ballfields -- "Little Fenway," "Little Wrigley," and "Little Field of Dreams" -- during a weekend of gameplay that has raised more than $6 million over the past 20 years.

Before his death in 2008, Tommy Long and his three sons and their 'Staten Island Yankees' Wiffle Ball squad would head to Vermont every August for the Travis Roy Foundation tournament. A perennial powerhouse, the SI Yankees have won the big show twice.

After their father passed, and inspired by the Travis Roy Foundation tournament, the Long siblings wanted to expand their fundraising in a way that honored their father and their hometown.

"So from there, our way of contributing even more to the Travis Roy Foundation was to start our own tournament down here."

But this is no backyard Wiffle Ball game, like the ones Samantha recalls from childhood memories with her father and brothers.

"In the backyard, just swinging away for homeruns," said Samantha. "You have to hit the house. 'I'm like, what if I can't hit the house?' 'No, you're hitting the house.'"

"I love it! I love it!" said Michael Nebel, owner of Castleton Corners Pub, a Staten Island bar that is one of the tournament sponsors. "I'm old, half these guys are half my age. It feels good! You feel like you're young again, until the third game when you're hurting."

Castleton Corners Pub is one of a handful of local businesses, including restaurants Kettle Black and Ho'Brah, that has thrown its weight behind the tournament in support.

"All the sponsors, they're all local businesses from Staten Island," said Vinnie Trimarco, a member of the Staten Island Yankees and a volunteer umpire. "Food, tents, uniforms, there are so many things that people will help."

At the end of competition, Campania took home the 2021 crown, and more importantly, $10,200 was raised for the Travis Roy Foundation.

"It's what I dreamed of, honestly," said Samantha, reflecting on what her dad would think if he could see this. "To have his name be a part of it, because I know that's what he would have wanted if he was still here. He would just say, 'Who has it better than us?'"