'Not bad for a grape picker': Valley native Tom Flores inducted into the Pro Football Hall of Fame 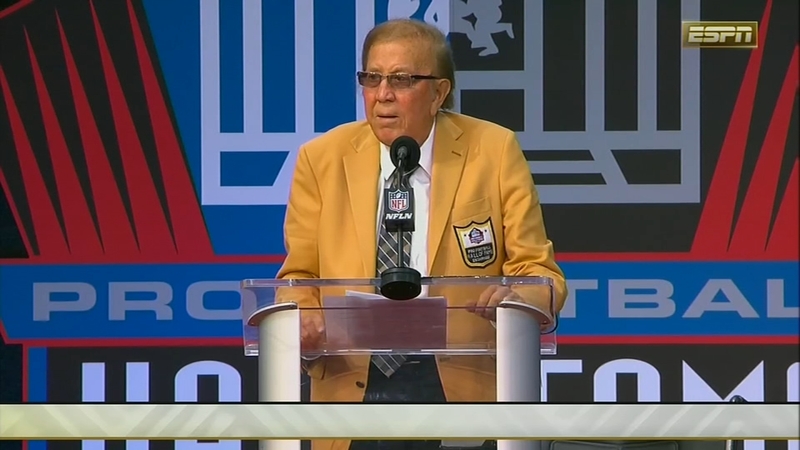 SANGER, Calif. (KFSN) -- After years of waiting, Tom Flores has been inducted into the Pro Football Hall of Fame.

The Sanger native, known as a trailblazer for minorities and one of just two people to win a Super Bowl as a player, an assistant coach, and a head coach, was inducted in an enshrinement ceremony on Sunday afternoon.

At the ceremony, Flores spoke extensively about his roots and childhood in the Valley.

"My journey began a long time ago, when my father as a 12-year-old migrated to the Central Valley in California with his family. They came from Mexico and settled in the San Joaquin Valley and worked the farms... and our first house had dirt floors and no indoor plumbing."

Sanger gets a shoutout @ProFootballHOF from Tom Flores!
"Long way to come from Sanger...you ever try to get here? Not an easy place to get to...I've been trying for a long time to get here!" @ABC30 pic.twitter.com/AaaAQj2n35

He also gave a shoutout to Sanger High School and his hometown of Sanger to hoots and cheers from the crowd.

Sanger High has a special field called Tom Flores Stadium dedicated to him.

Flores attended Fresno City College in the mid 50s. In 1960, he was named QB1 for the Oakland Raiders, becoming the first Hispanic starting quarterback in professional football. Named an All-Star in 1966, he finished his nine-year career with 93 passing touchdowns.

"Today, on this stage, we're all on one team," Flores said. "One team of gold jackets. This is a very emotional day for me.

He ended his speech with another reference to the Central Valley:

"Here's a memory I'd like to leave with you: In Super Bowl XV in New Orleans, the clock was ticking down with one minute and we're ahead by 17 points. One of my assistants, the late Sam Boghosian, who also was from the Central Valley of California, and his family is here tonight, leaned over and looked at me and said, 'Not bad for a couple of grape pickers.' I said, 'Sam, not bad at all for a couple of grape pickers.'"

"Not bad for a couple of grape-pickers."
That's how Tom Flores wraps up his speech @ProFootballHOF. Plenty of Central Valley ties and references throughout. Congrats to the Sanger legend on a HALL OF FAME career! @ABC30 pic.twitter.com/yW1v2fEHV3

Boghosian, a graduate of Fresno High School, was an assistant coach under Flores when with the Raiders and is a member of the Fresno County Athletic Hall of Fame.