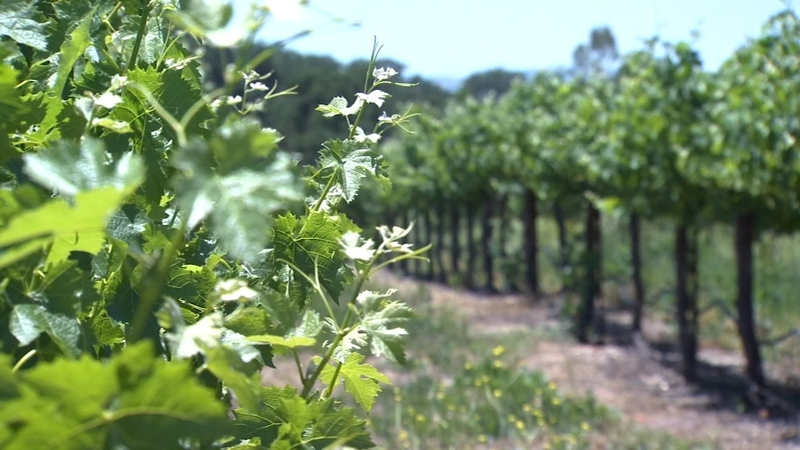 PASO ROBLES, Calif. (KFSN) -- California's Central Coast has long been known as a vacation destination, but now it's getting some serious recognition as a wine region.

If wine gets better with age, it seems fair that a wine region could do the same.

Napa may have put California on the wine map, but the Paso Robles area has been gaining name recognition too.

Jim Gordon is visiting Tobin James Winery from South Carolina. He decided to skip Napa and headed to the Central Coast.

"Napa is so crowded, some of the wineries are $50 to taste, and you can't afford the wines," says Gordon.

Winemaker Gary Eberle has been in Paso Robles since 1982, and he says the area was not always this well known.

"We used to go out and say, 'Hey, this wine is from Paso,' and people would say, 'Oh, is that in Texas?' 'Is that in Baja California?' They don't do that anymore," says Gary Eberle.
When Eberle Wine started, there were a total of three wineries in Paso Robles; now there are over 200.

"We think that what makes Paso great is its diversity, and we can grow so many varieties well."

That's why wine lovers around the world are taking notice.

Joel Peterson with the Paso Robles Wine Country Alliance says the recognition of the region's wine craft has taken off in the last two to three years.

"Now it's really starting to be seen on a national level. There are really a lot of those publications saying, 'Wow! Paso is making some really good wines'," Peterson says.

The region is home to more than 60 varieties of grapes and holds more than 44,000 acres of planted vineyards, but it's the small-town feel that sets Paso apart.

That feel is evident at smaller wineries like Victor Hugo, which is run by Victor Hugo Roberts, his wife and that's it.

"That's the benefit of keeping it small and doing it by appointment, it guarantees one of the owners will be here to wine taste," Roberts says.

Keeping that small-town feel will be a balancing act for the booming region. There are about 1,400 hotel rooms in the city, but that's expected to double in the next five to ten years. Restaurants are popping up left and right too.

"When you drive around town you quickly realize none of this was here 15 years ago," says Brian Terrizzi who runs a pasta shop. It's located in an area called Tin City, an upscale industrial park filled with wineries that weren't here last decade, yet another indicator of the boom Paso is experiencing.

Of course, it all comes back to the wine and the small-town experience that make Paso unique.

No matter where you're coming from, it seems to be getting better with age.