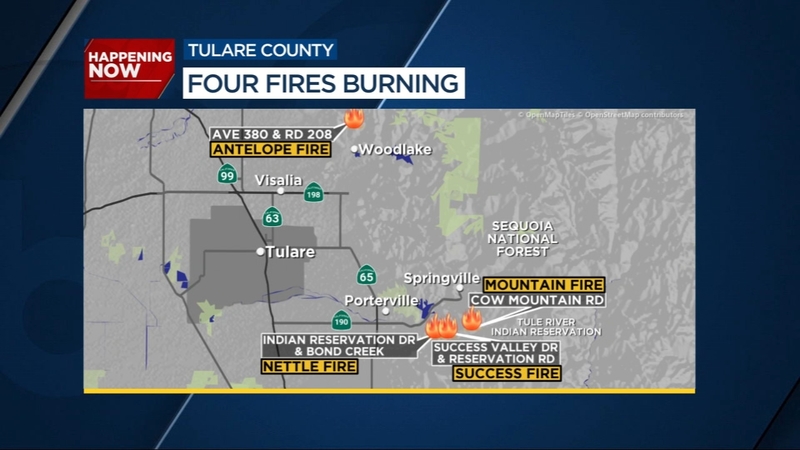 The first fire, named the Antelope Fire, was reported at Avenue 380 and Road 208 northeast of Woodlake, CAL FIRE said.

So far, the flames have burned 11 acres and are 80% contained.

Another fire has scorched 800 acres east of Porterville on Success Valley Road and Reservation Road. Crews currently have it 90% contained.

No structures appeared to be threatened by either wildland fires.

Nettle Fire
CAL FIRE firefighters were also helping the Tule River Indian Reservation fire crews battle the Nettle Fire off Indian Service Road BIA 70 and Bond Creek, which is located east of Porterville. The fire has grown to 600 acres and is just 5% contained.

The forest service has sent several crews and a helicopter to combat the flames. Containment grew to 35% overnight.

U.S. Forest officials say a giant sequoia was emitting smoke in the area where the Castle Fire burned last year. Crews have evaluated the tree and do not consider it to be a threat. Firefighters were monitoring it to put out hot spots.

Officials have released details on the areas in Central California most at risk of fires this year.

Graphic not displaying correctly? Click here to view in a new window.