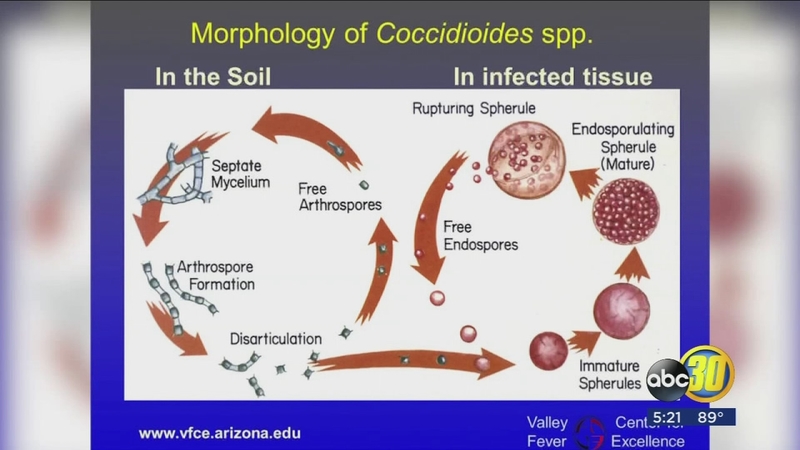 PHOENIX, Ariz. (KFSN) -- Researchers at the University of Arizona are studying a so-called "orphan" disease; that's anything but rare in one part of the United States. Most people who get it are barely affected ... others develop life-threatening symptoms, sometimes months later. A third of pneumonia cases near Phoenix and Tucson turn out to be Valley Fever, and even visitors are at risk.

Sheri Hill, her mom Jeannie Farrington, and her son Brandon are among the small percentage of people who got the worst form of Valley Fever.

"Later on, I developed a welt on my cheek, and that's how we found out it was disseminated. This disease is much worse than people realize." Hill explained to Ivanhoe.

Of 150,000 cases reported each year, 60 percent of infected people show no symptoms. Most of the rest get pneumonia-like problems, and about one percent get the disseminated form; where fungal spheres burst and spread spores into the lungs and bloodstream. That can cause welts or sores, sometimes months later.

"The fungus grows in the soil, and when things dry out, spores get out of the soil into the air. If you happen to inhale one of these spores, you'll become infected," explained John Galgiani, MD, Director of the Valley Fever Center for Excellence at the University of Arizona College of Medicine. (Read Full Interview)

Dr. Galgiani just won a 2.2 million dollar grant to see if there's a genetic reason why some people get so sick and if that could lead to a vaccine.

"It's a part of precision medicine that you might be able to find some specific way of preventing that by intervening to supplement or to restore genetics in ways that are protective," Dr. Galgiani told Ivanhoe.

Dr. Galgiani believes a vaccine is possible since so many infected people become immune. Sheri Hill just wants to make sure people learn the symptoms so they can get treatment quickly if needed.