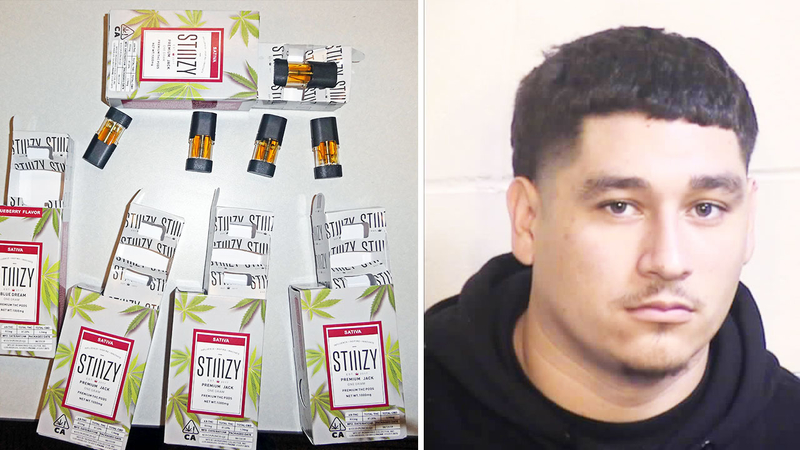 Ruben Dominguez of Dinuba was booked on multiple felony charges after a three-month-long investigation by Fresno County deputies.

They say Dominguez was using social media sites to sell flavored THC pods to minors under the name 'STIIIZY'.

"We know he's been doing this for a long time," said Tony Botti of the Fresno County Sheirff's Office.

Detectives sent a decoy who was a minor to meet Dominguez and buy some of these pods. After Dominguez sold the pods, he was arrested.

The arrest comes about two months after the state attorney general Xavier Becerra announced several thousands of dollars in grant money to more than a dozen agencies aimed at tackling tobacco and teen vaping.

Botti said back in October, the department received more than $500,000 to deal with cases like this one.

"There's an epidemic with vape products and having that at our disposal gives us more power to go after it," he said.

The grant will enable officers to enforce the illegal sale of cigarettes, vaping materials and other tobacco products to children over the next three years.

Lawmakers, schools and parents in the Valley have been trying to curb vaping among teens after a slew of illnesses and deaths across the country have been linked to the practice.

A large portion of the criticism has been directed against e-cigarette companies for their flavored pods after recently released studies found the flavors were especially popular among young users.

In California, a person must be 21 years old to purchase tobacco products and only licensed cannabis businesses may sell products containing THC.

Governor Gavin Newsom has directed the state to spend $20 million on a public awareness campaign about the dangers of vaping nicotine and cannabis.

She says they're seeing an increasing number of students showing up to the nursing offices after having used vape products.

"They're coming in, anxiety is high. They're getting it from the black market from their friends or buying off the streets," she said.

She added that parents just need to be aware and keep an eye out on vape products in disguise.

"Be aware of what your kids may be ordering online, there might be packages... they look like USB drives."