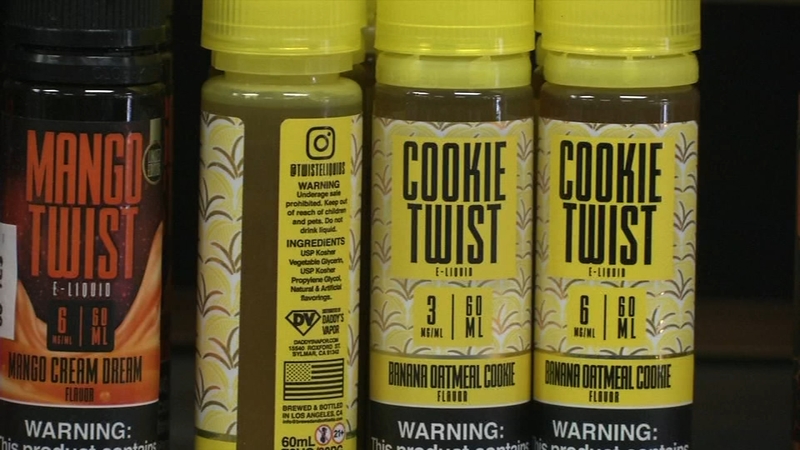 VISALIA, Calif. (KFSN) -- The Centers for Disease Control and Prevention reports that as of last week, there were more than 2,100 cases of lung injuries associated with the use of e-cigarette or vaping products, and 42 deaths.

As part of their investigation into the outbreak, the CDC said they've identified something called vitamin E acetate as a chemical of concern, saying it can be used as a thickening agent for vape products containing THC-the psychoactive ingredient found in marijuana.

"(That has) really nothing to do with vape juice," said Vape Savvy Owner Matthew Davidson. "And why is it that there's 480,000 people that die a year from smoking but cigarettes are still on the shelf?"

Davidson planed to attend Monday night's Visalia city council meeting, where councilmembers will weigh a possible ban on the sale of e-cigarettes and flavored tobacco products, which many believe are targeted at teens.

Other California cities and counties have enacted such bans, the Governor has allocated millions of dollars to combat vaping through a public awareness campaign, and on Monday, the state's attorney general sued the nation's biggest e-cigarette company.

Earlier this month, Tulare City Councilmembers decided not to move forward with a vape restriction ordinance.

Davidson says a ban in Visalia would put him out of business.

"In all reality, we shouldn't be making more rules to ban stuff for people," he said. "We need to parent better. We need more programs in place to teach what's going on with vape, how to use it, and what it is."

After years of smoking two packs of cigarettes a day, Brian Mahony made the switch to vaping in February.

Since then, he says he's saved money and his health has improved.

He's up for some new rules, but isn't on board with an all-out ban.

"Create a balance," Mahony said. "Don't take it away from grown, mature adults who can make mature decisions. What do you want me to do? Go back to the tobacco industry? I don't want to go to that place."

But he thinks it will help, and is hopeful that the state and federal government will take action too.

Monday night, the city council had a split vote, two councilmements voted against the ordinance, while two voted for it. The council will come back in January to vote on the same ordinance.

Visalia Unified School District will host five more presentations about vaping throughout the rest of the school year: