UPDATE: Tornado that touched down in Fresno County upgraded to EF1 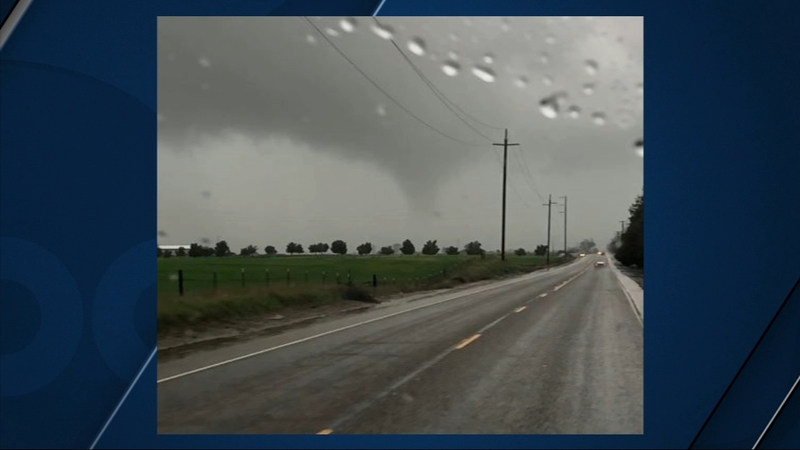 Tornado that touched down in Fresno County upgraded to EF-1

FRESNO, Calif. (KFSN) -- UPDATE: The NWS has upgraded the tornado that touched down in Fresno County to EF1, the wind reached up to speeds of 86 mph.

---
A tornado touched down in the area of Herndon and Academy in Fresno on Thursday, the National Weather Service confirmed.

ABC30 Insider Josh Brockett sent in a photo of what appeared to be a funnel cloud. A funnel cloud is a rotating funnel-shaped cloud and only differs from a tornado because it has not touched down, according to the NWS.

The NWS analyzed the picture of the funnel cloud and determined it had touched down briefly and was a tornado.

Local Storm Report of tornado reported Herndon and Academy roads in NE Clovis. Tornado was videotaped by the public and submitted to the media. @ABC30 submitted the video to the NWS. Preliminary estimation is that it was an EF0 tornado. #cawx #castorm #tornado https://t.co/YNXjpxw3L4

It is in the weakest category of tornadoes - EF0 - and there were no reports of anyone having been hurt.


It appears an outbuilding may have been damaged. A close look at some video of the tornado shows that debris was swept up and flying within it.
Report a correction or typo
Related topics:
weathertornado
Copyright © 2021 KFSN-TV. All Rights Reserved.
More Videos
From CNN Newsource affiliates
TOP STORIES