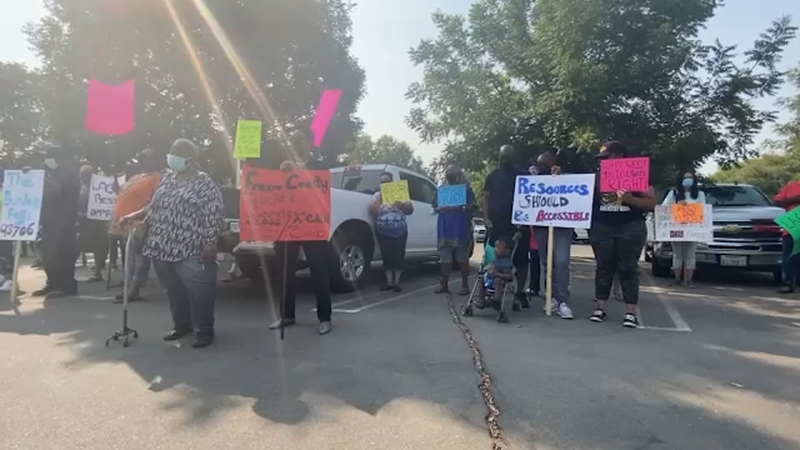 FRESNO, Calif. (KFSN) -- A large group of West Fresno residents rallied together Wednesday morning to voice their concerns about what they say is changing at the Department of Social Services' West Fresno Regional Center.

"This horrible, egregious, irresponsible and callous action by the county is unacceptable," says Bob Mitchell.

"We are getting temporary fixes, we need permanent fixes," says Debbie Darden.

"This is the calamity of poor people," says Avis Braggs.

It's few minutes from her home and she was able to drop off documents required for her welfare services.

She cares for her young grandson on a fixed income, so driving 20 minutes to the new Department of Social Services office in Clovis is a hardship.

"This is just a kick in the stomach, I was angry," she said. "When I left that site out there, I cried all the way home."

For those who don't have a car -- the trip takes more than an hour each way on a FAX bus.

The Golden Westside Planning Committee and other West Fresno leaders have been meeting with Fresno County supervisors since last August about the changes at the West Fresno Center.

Residents say there were signs that said, "closed, go to Clovis."

"How dare you take this away from us," says Sharon Williams.

County leaders showed up after the protest to address concerns.

They say the original shut down was to follow state public health orders.

But they later reduced staffing in West Fresno because of low usage. They say in a three-month period, they only processed six applications at the center so they reduced hours to one day a week.

Now, after the community outcry, they are now staffing the location every day.

"It was never intended to remove services," says Delfino Neira with the Department of Social Services. "It might have been perceived that way but we did, overtime, add things to all offices."