The City of Fresno ramped up the response across the city with more than 8 tree crews - that's 4 times that of a normal day.
KFSN
By Brittany Jacob 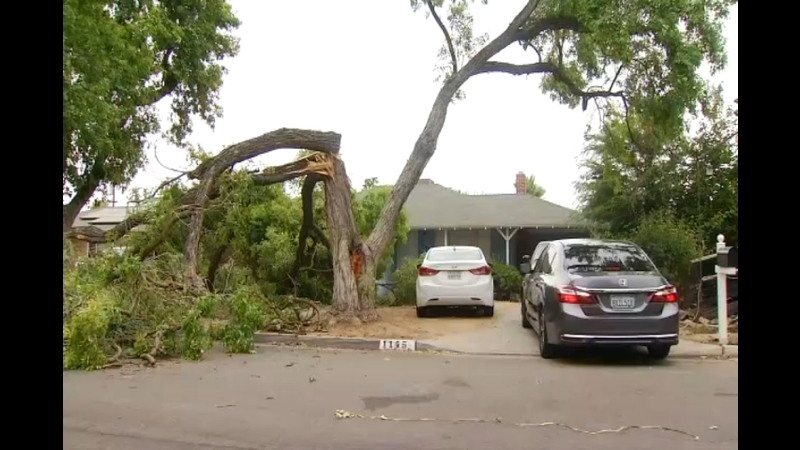 FRESNO, Calif. (KFSN) -- Fierce winds led to blowing dust and downed trees throughout Fresno on Wednesday morning - even causing costly damage for some in northeast Fresno.

"I came out and there was a whole tree inside of my back window," said Fresno resident Jennifer Ramirez.

Ramirez was just about to leave with her grandson when her neighbor told her about the destruction.

She submitted work orders to the city about the tree once before, but that didn't stop the winds from crushing her car window.

Rangel said he saw the first branch fall on top of his truck, so he moved it, and just an hour later, the tree snapped.

"I was thinking about my truck, that's my only transportation right now and I was like 'No!', not my truck!" he said.

"I'm just glad they came out as fast as they did, I wasn't expecting them until later on closer to the afternoon," said Rangel.

The City of Fresno ramped up the response across the city with more than eight tree crews - that's four times that of a normal day.

"This is what we prepare for on a windy day like this," said City of Fresno Public Works Director Scott Mozier.

Mozier says his top priority is safety. He said while the number of tree calls they received - 78 - is not the worst, it's still unusual for June.

He says the drought has impacted trees and their root stability.

The public works director encourages residents to contact the city about any emergency or downed trees through the FresGO app or through the 311 Center.