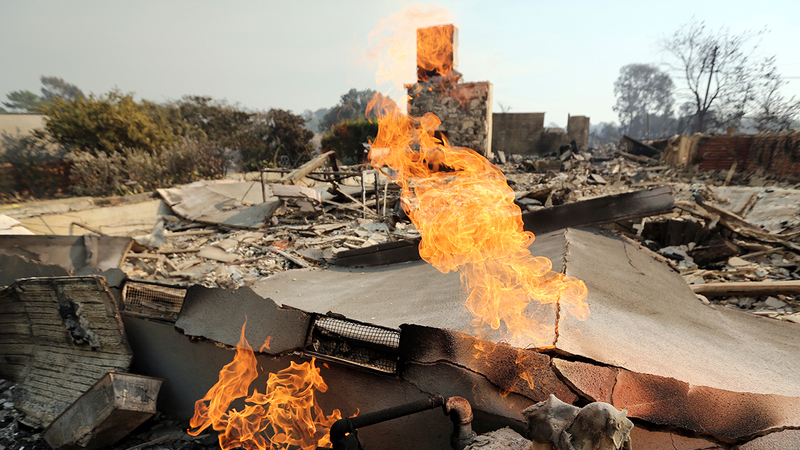 MALIBU, Calif. -- Hundreds of firefighters on Sunday morning continued to battle a relentless vegetation fire that has killed two people consumed 83,275 acres near the border of Ventura and Los Angeles counties.

Three firefighters have been hurt in the incident, according to Cal Fire. Their conditions and the nature of the injuries were not immediately available.

Personnel from multiple agencies took advantage of a lull in wind conditions overnight as they attempted to make progress against the so-called Woolsey Fire, but a weather forecast that calls for renewed Santa Ana winds has homeowners and fire officials on edge.

According to officials, 177 structures have been destroyed in the blaze, which erupted along with the nearby Hill Fire on Thursday evening and ultimately prompted the evacuation of some 265,000 residents -- 95,000 in Ventura County and 170,000 in Los Angeles County. Fifty-seven thousand homes remained threatened by the fire, whose containment increased to 10 percent.

With the winds returning, it's likely more homes would be lost, Los Angeles County Fire Chief Daryl Osby warned. "There's not going to be any relief in this firefight," he said.

By late Friday night, the smaller Hill fire's advance had halted, but the Woolsey fire kept surging. The two fires erupted Thursday as warnings of extreme fire danger covered much of the state because of dry weather and blowing winds.

In Northern California's Butte County, the Camp Fire killed some in their cars as they tried to flee the racing flames. The state's most destructive fire in at least a century has burned down more than 6,700 buildings, almost all of them homes.

President Donald Trump issued an emergency declaration providing federal funding to help firefighters battling the wildfires across California.
Authorities said a town hall meeting will be held at Taft High School in Woodland Hills at 5 p.m. Sunday for people who've been impacted by the fires to get more information.

The causes of the fires remain under investigation.