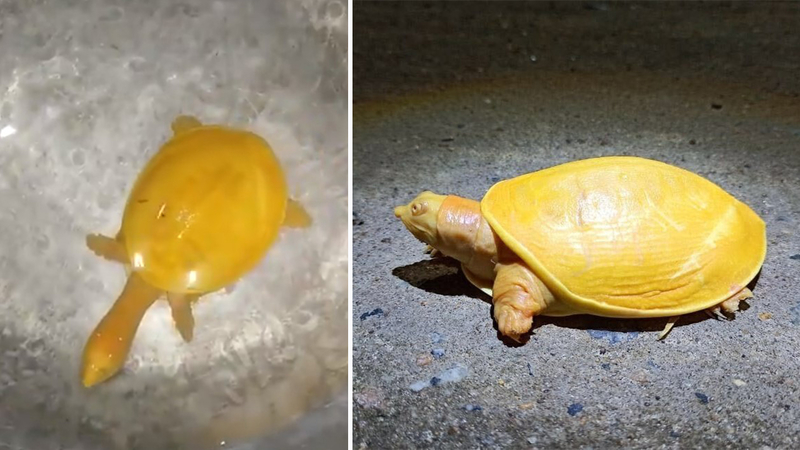 A rare yellow turtle rescued by villagers in eastern India has been handed over to scientists who will study the extremely rare reptile.

Locals from the Odisha's Balasore district spotted the unique yellow turtle on Sunday.

Susanta Nanda, an Indian Forest Services (IFS) officer, also tweeted a video of the small turtle, saying "most probably it was an albino." He also shared a video of the turtle swimming in water inside a vessel.

Most probably it was an albino. One such aberration was recorded by locals in Sindh few years back. pic.twitter.com/ZHAN8bVccU

The turtle also appeared to have pink eyes, a feature that also indicates albinism.

Speaking about the rescued reptile, Bhanoomitra Acharya, Wildlife Warden, said that it was a unique find.

"The whole shell and the body of the rescued turtle is yellow. This is a rare turtle, I have never seen one like this," Acharya said.

Close snap of the same. Mark the pink eyes, one indicative feature of albinism. pic.twitter.com/MfXrXVYbfH

Last month, a rare species of Trionychidae turtle was caught by fishermen at Deuli Dam under the Mayurbhanj district of Odisha. It was later released by the forest department in Deuli dam. Trionychidae turtles are softshell turtles, which are found in Africa, Asia, and North America.